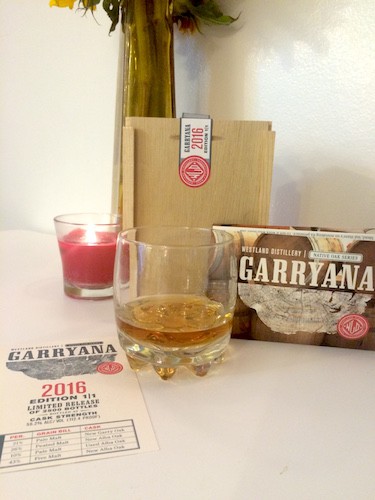 The Western Hemlock is the official state tree of Washington and the Douglas Fir, the official tree of Oregon. Yet it is another hallmark Pacific Northwest wood stealing center stage in Westland Distillery‘s newest whiskey creation, a unique bottling known as Westland Distillery Garryana. Part of the distillate in this offering is aged in barrels made of wood from a Pacific Northwest native oak known as Quercus Garryana (Oregon White Oak).

Logging is a historically vital part of the Pacific Northwest economy – see Portland’s soccer team, The Timbers. It makes sense then to use a native tree to capture the essence of this region as part of the DNA of the whiskey reviewed here.

Part of a new native oak series from the distillery, the whiskey is composed of 21% pale malt from a cask of New Quercus Garryana (Garry) Oak, and this unique flavor permeates the final product. Westland Distillery is very transparent about their process, providing the full mash bill and aging regime listed below in their (beautiful and hand-written) packaging:

What’s particularly interesting around this whiskey from a story perspective is how Westland came to be in possession of the wood for the Garryana project. Through a cooperage they work with in Oregon, master distiller Matt Hofmann and his team became aware of a stock of already aged Garryana lumber that no one wanted which was just sitting at a nearby mill. The thrilled team scooped up said stock for the purposes of it being made into whiskey barrels.

From the producers themselves:

“So what then have we learned about Garry oak so far? While each is a little different from the next, our five single cask releases of Garry oak whiskey this year have revealed some core themes. The whiskies are dark. Imagine the characteristic flavor profile of Quercus alba, seen through a fog of smoke. We get molasses instead of caramel, heavy clove in place of generic baking spices, and in the place of coconut and vanilla, we have smoke, coffee grounds and a meaty savoriness. But these casks, to whatever degree this is possible, were nearly identical. Each had the same period of air seasoning, the same toast level, the same maturation strength. What will the whiskies look like with less air seasoning? Or more? Perhaps much more? Are there flavors in Garry oak that we have yet to experience? And what of its effects on the integration of the spirit itself, in addition to the extracted flavor?

Trent Thomas, who along with his father-in-law Todd Dollinger operate reWine Barrels in Salem, OR, has more experience with the species than perhaps anyone. “After years of working as a cooper I’ve become well-versed in the various oak species found across the globe,” he says. ‘I’ve seen wines from delicate pinot noirs to even massive Washington reds be easily bullied by the brooding and hedonistic flavors of Garry oak while the tannic structure takes years to mellow and temper. None of species we see employed much more widely can impart flavors as bold and complex as our local oak. Not Eastern U.S, French, Hungarian or even the Acacia.'”

One of the most interesting things about working with Garry oak and visiting the good folks at reWine was learning more about the world it comes from. The first reality that was plainly apparent as we traveled the Willamette Valley is that Garry oak is not a particularly popular wood to employ, whether in the whiskey industry or outside of it. We didn’t have to look too far to find weathered piles of it left unwanted.

A betting man would guess that perhaps too much was harvested before an industry crash, but we learned that Garry oak has always been rarely farmed and most of the wood that does find its way to mills is blow-down or simply old. Seeing hundreds of board-feet of beautifully aged wood, from one years old to seven, with everything in between, was frankly shocking; like we’d won the oak lottery. And like the wood that lines the walls in our tasting room in Seattle, this oak was salvaged—unwanted by others who could not see its potential.”

Garryana is 56.2% alcohol by volume (112.4 proof) and bottled at cask strength. Released in June of this year, it is part of a 2,500 bottle product limited run.

Nose: One sniff will perk your nose and whole palate right up. There is something exceedingly fresh about it, especially compared to other single malt whiskeys. The scent of fresh driftwood and young cherries is reminiscent of a day at the beach. This is complemented by coco powder and chipotle smoke notes that dance like fumes from a dying bonfire.

Palate: Amazingly balanced but subtle all the way through. Ripe apricot jam and honey hit the mouth first. Then toasted chocolate and smoke comes towards the end, dusting the tongue in small waves.

Hands down, this is a fantastically crafted single malt whiskey and it stands true to the producers’ word. The whiskey is a great homage to traditional Scotch, but also full of Pacific Northwest flavors all-its-own. For a single malt whiskey, the freshness of nose and flavor is welcome and unique. The flavor is perfect without being aggressive, leaving you wanting another sip after each taste. This is simply a must-try, for your own bar or as an interesting party gift.