Seattle’s Westland Distillery, as we’ve written in the past, is one of the craft distillers working to define American single malt whiskey as its own distinct category. The six-year-old distillery has focused thoughtfully on single malts that capture the terroir of the Pacific Northwest, and the approach seems to be working: they were acquired by Rémy Cointreau.

To that end, Westland has worked to use ingredients and materials that are not just just locally sourced, like the Washington-grown barley that goes into many of their whiskeys, but endemic to the region. One particularly intriguing ongoing experiment is a series aged in Quercus garryana—Garry or Oregon white oak, to friends—the Pacific Northwest’s native oak (virtually all whiskey aging barrels made in the states are made from Quercus alba staves). Westland also has access to its own Washington state peat bog, although their locally peated whiskeys won’t be released for a few years. 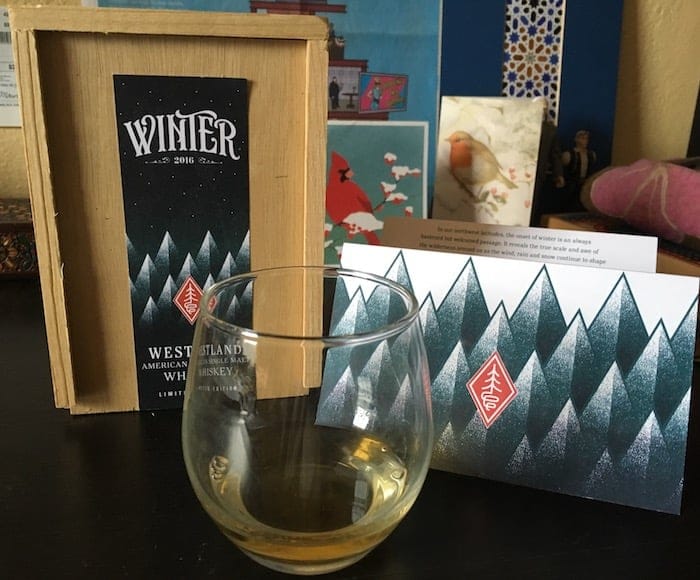 This particular whiskey, Westland Distillery Winter 2016, is a special seasonal release. It’s a blend of three different malts, with 21% being a Scottish peated malt and the rest unpeated. The resulting spirit is aged in four different types of barrels—ex-bourbon, ex-Oloroso sherry, ex-Westland single malt, and new French and American oak—for at least 34 months, and bottled at 50% ABV. The distillery is quite up-front about the vital stats on all their whiskeys; you can take a look here if you’re interested.

The media sample I was given came nestled snugly in wood shavings in a cute wooden box, along with what resembles, more than anything, a Christmas card. Although the card is just a press release, it added to the gift-worthy appearance of the whole package. Unfortunately, according to the distillery, the retail version comes in “our standard cardboard bottle box,” presumably with no Christmas card. Alas. In any case, here’s a particularly poetic excerpt excerpt from that press release:

“At once brisk and cozy, austere and comforting, it hovers over the threshold of the season’s two theaters, the hinterland and the hearth. Nine casks were married for this release. Smoke is the one constant, its waft on the wind carrying us in and out of each scene.”

Nose: Brightly fruity up front, with pear and apple, along with a major dose of biscuity grain. The smoke is there, but it sits politely in the background. I also get some pleasant cinnamon and nutmeg, and a lightly funky note, like a wedge of English cheddar.

Palate: More fruit, more like green apple than pear, opens the palate. Peat smoke is more prevalent on the back of the tongue, but again, in just the right dose. More grain notes evoke—dare I say it?—Christmas cookies. The texture is mouth-coating but light, and the finish is pleasant, with more of that green apple and the barest hint of oak lingering.

I had to laugh at the first whiff I took of this whiskey, because of course the stuff that came out of that super-cute box smells exactly like eating a slice of apple pie in front of a fire. Most of the time I reflexively turn my nose up at things like beautifully-written ad copy and heavy cardstock, but friends, I have bought into Westland’s brand wholeheartedly.

I couldn’t resist this stupidly cozy whiskey’s charms if I tried. Just as promised, it does remind me, for all the world, of coming in to a crackling fire after a day spent doing wintry chores.