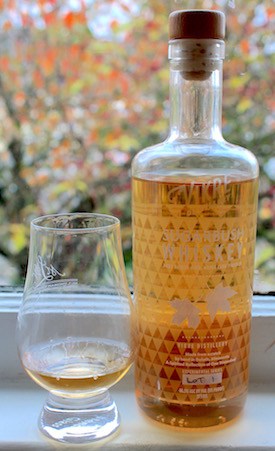 Vikre Distilling in Duluth, Minnesota, crafts a variety of uniquely Minnesotan products, from gin distilled with locally foraged botanicals to traditional aquavit. Their Sugarbush Whiskey is made with various finishes and ingredients that truly speak to a Midwestern sensibility.

Sugarbush is produced from a corn-heavy mash bill, which primarily aged in ex-port barrels fortified with the addition of maplewood staves. Then, it’s transferred for finishing to ex-bourbon barrels previously used to age maple syrup. Aged just less than two years, Sugarbush is somewhat young, but has a very interesting story to tell, likely in a heavy Minnesotan accent. As a native Minnesotan myself, I can appreciate a local product with a point of view.

I tasted Lot 1 of Vikre Sugarbush Whiskey, which sits at a healthy 46.5% ABV and reportedly quickly sold out after it was released (they are on Lot 3 as of the time of this review). The distillery has a detailed account of the the whiskey leading up to the day it was put out for sale for the curious. As for the bottle, it is quite cute: A pattern of matte triangles covers the bottle, with a pair of maple leaves in the center. The wooden stopper sports the same stylized “V” as their logo.

Appearance: Vikre is a very, very pale blonde color in the glass.

Palate: Vikre is obviously young; light on the palate and actually not that sweet. Sulphured apricots and unsweetened whipped cream appear on the palate first. Marmalade. After a few sips, the maple elements of the dram start to come out. Mid-palate is pleasing, but the edges are pretty rough. The finish is rather bitter and pithy. Although currently rather unbalanced on the palate, it is clear that Vikre had an interesting vision for this whiskey.

Vikre clearly has a point of view, which I can appreciate for a craft American whiskey; they are trying to set themselves apart in a sea of mediocrity. I think that a little bit more time in the barrel can only do this dram good. It has a lot of potential, and I love Vikre’s commitment to local sourcing. Vikre Sugarbush Whiskey is a good start from what appears to be a stand-up operation!