Vikre Distillery began as a concept embracing one flagship ideal; the concept that the water of Lake Superior is perfect for creating distilled spirits. Joel and Emily Vikre, residents of neighboring Duluth, Minnesota, hedged their bets on this divine water despite a lack of formal distilling experience. As a couple, they knew that they possessed some critical skills: business savvy, construction know-how, and an understanding of flavor combinations and general culinary prowess. In 2011 the Vikres gave up promising careers to begin to realize their dream, and the bottle of Smokey Rye in front of me is proof that they achieved it, at least to some degree.

It all comes down to the whiskey, however, and their unique take on rye has just enough of a bend to perk up the ears of the experimental spirits drinker. Inspired by a favorite smoked ale from local Bent Paddle Brewing, Vikre’s Northern Courage uses cherrywood-smoked barley malt to add layers of earthiness to the already-tannic rye malt presence. Named after the special type of personality required to live so far north in such rugged terrain, they intended the rich, sharp, angular flavor profile to be the ideal tipple for such a rough-and-tumble individual. 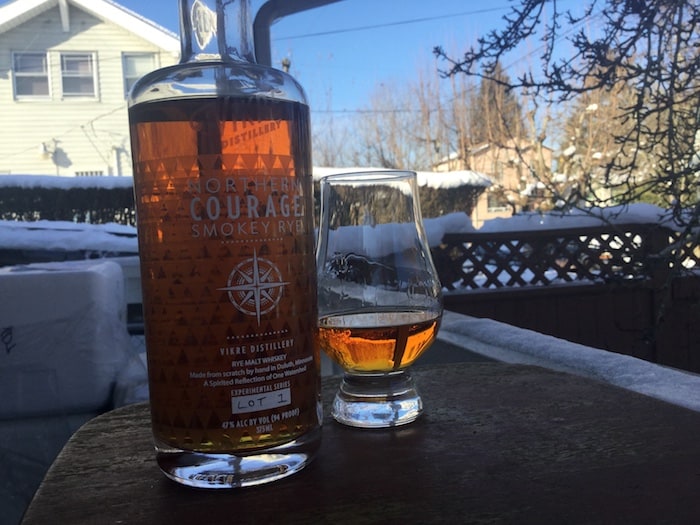 Vikre’s Northern Courage incorporates oats as well as the smoked malt and rye, and is finished for up to two years in new charred Minnesota oak barrels. Its experimental nature has the batch capped at five barrels, and was available only at their tasting room in Duluth. If you didn’t get one, your chances may be zero now, but at least you can read about it and prepare to be in queue for the next release. It certainly is worth checking out if your taste buds thrive on the stranger side of spirits.

Appearance: A body of slightly toasted straw shows some festive orange accents in its deeper wells, legs are strong and smooth. The spirit has an impressive clarity and shows a bit of splitting around the edges. Inviting if nothing else.

Nose: First impressions here are not ideal. The overwhelming aroma that hits me with a big punch directly is akin to the interior of a hardware store. It’s a wildly packed melange of glues, paints, and random wood scraps. There is a pleasant note in there too, a waft of fresh baking bread with a near-salty twist and a hint of circus peanut, but hardly enough to keep me returning for deep inhales.

The lack of smokiness in the nose is also mildly disappointing, especially given the whiskey’s moniker. Returning to the aroma after several sips amplifies a butterscotchy note from the taste, and brings some of the worst of its smokiness, almost wet dog-like, to the nose.

Palate: If the spirit’s aroma didn’t have enough time over two years to meld, its taste on the palate certainly did. Immediately, a soft wave of vanilla cascades over my palate in perfect proportion. There is a sweetness to back it up, and that husky, dirty slice-of-earth that is rye appears as the sweetness fades to lend a zippy contrast to the initial desserty profile.

The dose of smoked malt shows its attributes on the midpalate on the third or fourth sip, appearing more as an acrid, ashy aftertaste than the more fully realized flavor of smoke (think BBQ), but subtle enough not to negatively affect the overall taste experience.

One of the more interesting smoke and rye pairings I’ve encountered. What it lacks in aroma, it more than makes up for in a cavalier mish-mash of flavors that work well together, and continue to evolve and change in surprising fashion as the whiskey breathes. This is one whiskey that I’ll share with engaged whiskey friends instead of hoard for myself.

It’s a shelf novelty, a rye oddity, and an odd bird for sure, but one which will both inspire conversation and open the minds of more conventional whiskey drinkers.

Shares
333
Views
Share on FacebookShare on TwitterGet Our Newsletter
Get The Glenlivet 18 Year Old at ReserveBar. Shop now!