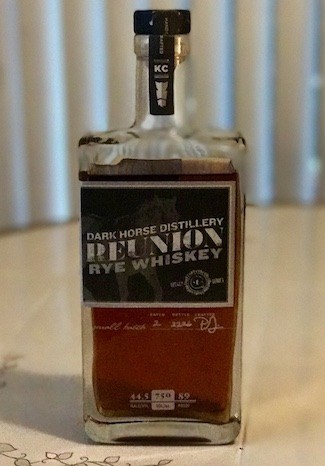 The most successful and  interesting stories in craft distilling seem to come from distillers who bring local flavor into their process. The Union Horse Distillery in Lenexa, Kansas, (just outside of Kansas City) has done just that.

Being from Kansas myself, I was surprised to find there was a distiller of this level of quality in the state that never formally ratified the 21st amendment. Operating since 2010, the distillery was forced to change their name after losing a trademark dispute between the distillery and the E&J Gallo Winery.

What makes the Union Horse distillery unique is that it’s what’s known as a grain-to-bottle distillery. This means that they they mill locally sourced grains in-house, as well as barreling and bottling the whiskey on site.  While many whiskey makers  would enjoy having this type of control, maintaining a grain to bottle distillery takes a lot of upfront investment costs. This end-to-end control of the whiskey production allows them to experiment to a higher degree and precisely manipulate their brand’s flavor.

Note- the bottle I reviewed was from before the distillery changed its name to Union Horse, and also has a lower proof than the Union Horse branded bottles (89 proof vs 93 proof).

Appearance:  deep and clear with a pretzel hue.

Nose: The initial smell is spicy, but not overpoweringly so, with notes of cloves and nutmeg. There is also a distinct  cigar box/humidor presence in the nose.

Palate: The first sip starts surprisingly sedate with flavors of raisins, caramel and cinnamon. The flavor then evolves into the signature rye spice, but with hints of ginger and balsa wood.

This whiskey is for intermediate fans of craft distilled rye whiskey. For beginners, the subtleties of the flavor may be lost on them, and thus it may not justify the price. It’s still good bottle of whiskey, but a more developed palate will be able to appreciate it more. It's a good buy and a great example of the distinctive flavors that can come out of grain-to-bottle distilleries.

More than anything, as a Kansan myself, this is a product that makes me think of my home state with pride.