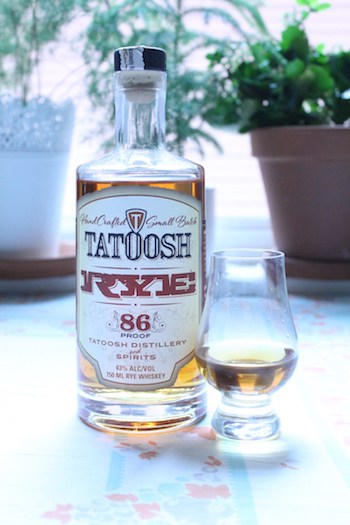 Hailing from our sister city of Seattle, Washington, Tatoosh Rye is another in a long line of Northwest craft spirits. Tatoosh Distillery was founded in 2009, the brainchild of its founders, friends Troy Turner and Mark Simon. Tatoosh bases its whiskies on 100-year-old family recipes from Turner’s family. They claim to use only local grain in their spirits, an American-made copper pot still, and proof their spirits down with water from the nearby Cascades.

Tatoosh Rye has a mashbill of 70% rye and 30% corn, and is laid to rest in a standard 53 gallon new American oak barrel with a #4 char. While Tatoosh Bourbon is aged three years, the rye lacks an age statement. Considering that it is not labeled “straight rye,” we can assume it must be aged less than two years.

Having only tried Tatoosh’s bourbon a few months prior to writing this review, my interest was piqued upon reviewing this rye. From what I can recall, Tatoosh Bourbon is one of the stranger takes on bourbon I’ve experienced in the recent past. It is light, dry, and has an overwhelming menthol character. Although I originally purchased the bourbon as a cocktail mixer, I quickly realized that Tatoosh does not mesh well with many classic cocktails, and resorted to drinking it straight. Taking all of that into account made me wonder what Tatoosh Rye had in store for me.

Tatoosh Rye has a very light honey color in the glass.

The nose is overall quite faint. Highlights include a certain wood chip/sawdust note, honey, cinnamon, warm hay, and warm berry and plum compote. It was difficult to discern any one overwhelming note at first, however, after opening, the cinnamon and honey duo clearly stood out.

On the palate, cardboard, red pepper flake, and honey nut cheerios came through; the sawdust from the nose came back very clearly on the palate. The mouth feel was light, and the dram seemed to lack any defining flavor backbone, making for a rather limp tasting experience.

The red pepper flake—the only proof of rye—lingered on the finish, with a touch of milkiness.

While Tatoosh’s bourbon is hardly my favorite bourbon, it at least has defining factors that set it apart from other local spirits. Tatoosh bourbon is one I recommend to those looking to try variations on a classic. Tatoosh Rye fell flat in comparison, but especially for a rye. It may, however, be a good introduction to rye for those who are afraid of too much spice and are adamant about experiencing local whiskies.

107
Shares
442
Views
Share on FacebookShare on TwitterGet Our Newsletter
Get The Glenlivet 18 Year Old at ReserveBar. Shop now!