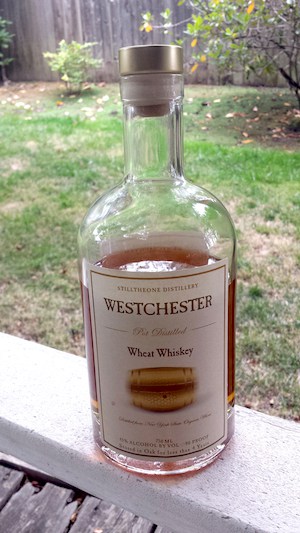 Westchester County, New York. Gateway to New York City, and suburban home to many of the metropolis’s top shakers and movers. It’s also home to Ed Tiedge, a former bonds trader who traded in the office life for something a little more… flavorful. Tiedge runs StilltheOne Distillery, whose claim to fame is their line of honey-based Comb spirits – Comb Vodka, Comb Gin, and Comb Brandy. With the addition of their Westchester Wheat Whiskey, StilltheOne proves that – just like with your portfolio – sometimes it pays to diversify your options.

The label on the back of the bottle asks the rhetorical question: Why would a distillery that make honey spirits want to make a whiskey? Tiedge’s reply: Because I like whiskey and I can make a good one. And that’s a good enough reason for me.

Aged in charred oak barrels, and sourced with 100% organic, New York-grown wheat, there’s not a specific age statement on this bottling. The only hint of age range is the fact it is “less than four years” old. It is said this whiskey has been “carefully distilled [in a large copper kettle] to capture the essence of the grain.” Does this translate into a better tasting, young wheat whiskey? Let’s find out.

Vital stats: Westchester Wheat Whiskey is made with organic, locally sourced wheat. 90-proof and stored in charred American oak for “less than four years,” a 750ml bottle retails for about $35.

Appearance: In the bottle, the Westchester Wheat Whiskey has a lovely, light honey-amber coloration. In the glass, it’s rather thin-legged.

Nose: The Westchester Wheat Whiskey has a subtle, fruity nose. There’s traces of honey – a nod, perhaps, to their Comb line of spirits – with a hint of banana and just the slightest whiff of peppermint. StilltheOne is vocal about their charred oak casks, but the scent of smoke is almost nonexistent.

Palate: The flavor-profile builds with each successive dram. The first sip brings a strong – almost overpowering – wave of licorice that transitions to a somewhat harsh burn. Eventually that burn settles to a mid-tongue sweetness.

Fortunately, subsequent tastes are more mellow, and the sweetness shines through more and more, merging honey with cracked pepper and a hint of brown sugar.

Westchester Wheat Whiskey starts sharp and overpowering, but by the time you reach the bottom of your tumbler, you’ll have forgiven your first impressions. It’s a light whiskey; more of a summer evenings on the back porch drink than a curled up with a book by the fireplace. But for $35 a bottle, you really can’t go wrong.

Score: 82/100 [SHOP FOR A BOTTLE OF STILLTHEONE WESTCHESTER WHEAT WHISKEY]

Shares
229
Views
Share on FacebookShare on TwitterGet Our Newsletter
Get The Glenlivet 18 Year Old at ReserveBar. Shop now!