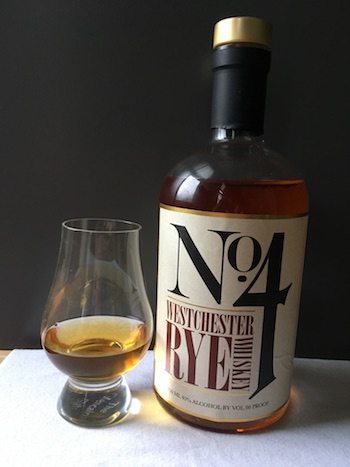 I don’t often find that the label of a bottle calls it almost exactly how it is, but New York-based StillTheOne Distillery is spot on when it describes Westchester No. 4 Rye Whiskey is “bolder and spicier” than most while also being “smooth and approachable.”

StillTheOne, located in Port Chester, attributes the spicy flavor  of its No. 4 Rye to the fact that the spirit is made with 100 percent rye, all of which is apparently grown specifically for StillTheOne with inspiration from the nearby city of Rye, New York (yes, that’s a place). The smoothness, says StillTheOne, is due to  its own fermentation and distillation style. The result of that combination is Westchester No. 4 Rye.

Formerly a Marine and then a hedge fund portfolio manager, Ed Tiedge took a circuitous route to whiskey, starting by learning about distilling in a small winery and distillery in Cognac, France, then moving into mead, then into honey-based spirits like StillTheOne’s honey-based Comb Vodka and Comb 9 Gin. He then founded StillTheOne, named after Tiedge’s wife and where she stands in his life, after he decided to make whiskey “because I like whiskey and I can make a good one.”

Westchester No. 4 Rye is aged for one year in No. 4 char new American Oak barrels (if you’re not familiar with barrel charring, here’s quick overview), and comes in at 90 proof.

Vital Stats: 100 percent rye whiskey, aged for one year in American Oak barrels and bottled at 90 proof. The going price is about $40 for a 750-milliliter bottle.

Appearance: Middle of the road golden amber, not too dark and not too light.

Nose: Starts with a light floral scent with a spicy ginger note that gives the combination some heft while still having a delicate aroma overall. After a few sniffs the combination takes an earthier turn toward sandalwood and citrus.

Palate: First touches the tongue with a delightfully earthy vanilla flavor that’s sweet, smoky, and a little spicy. Let it sit on the tongue for a while and after a few seconds, that sweet, smoky flavor starts to take on notes of cinnamon and clove, light and first and then building in intensity. It stays tame on the tongue, but upon swallowing, the spiciness hits the upper mouth and sides of the mouth of an unexpectedly potent salvo of cinnamon. That spiciness stays confined to those areas of the mouth in occasional bursts for the next minute or so.

The label certainly warned that this would be bolder and spicier than most rye whiskeys and that turned out to be absolutely true. The nose and the flavor profile are both well balanced and complex, except with the blast of spice right after you swallow. Still, after drinking it for a while, Westchester Rye Whiskey No. 4 simmers down (or I became adjusted to it), and it then becomes a nice sipper when you’re in the mood for something on the spicy side.