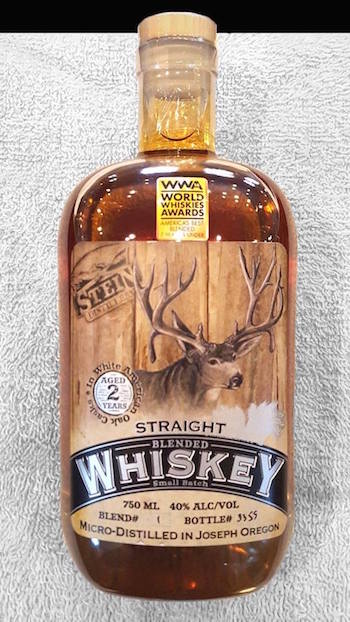 I’ll just lay out my biases right away: I’m enamored with Stein Distillery. It fulfills my idealized notion of what a rural, craft micro-distillery should be. They opened shop in Joseph, Oregon back in 2009. Ever heard of the town? If you are outside of the state, likely not. It’s a square mile in the northeastern corner Oregon that’s home to about 1,000 people.

The Steins farmed wheat there for generations, but also picked up some experience in construction, engineering, and moonshining—all skills that would come in handy when wheat prices bottomed out. They ordered a Bavarian dual column still (which showed up in pieces without an instruction manual—not even one written in German) and soon became the first micro-distillery in eastern Oregon, putting their homegrown grain to good use. When getting off the ground proved difficult, their neighbors volunteered to help out, probably after raising a new barn for another neighbor.

They farm their own wheat, rye, and barley, while sourcing corn from a cousin in Hermiston, Oregon. The berries for cordials are all from the Willamette Valley except for the huckleberries, which are sourced from coastal regions of the state. Even the rustic artwork on the labels is done by a neighbor, Dan Moncrief, a Joseph resident, taxidermist, and artist, who makes sure the ram on the two-year bottle of rye has smaller horns than the one on the five-year bottle in order to reflect the contents’ age.

All gushing aside, here’s where I must confess: the Stein Blended Whiskey is good, but not great. Fortunately for me and all Portland residents, Stein opened a tasting room in Beaverton early this year, so I was able to drop in and sample a few more of their offerings beyond the so-so blend.

The gentleman I met inside was Jonathan Sanchez, a former sports bar drink-slinger who so impressed the Steins on a visit to his bar that they made him their Beaverton tasting room manager. We chatted for most of an hour about liquor, and he generously shared his insights about the Stein family and his visit to the Joseph distillery. I worked through an ad hoc flight of samples and walked away with this: everything Stein Distillery creates is made with care and ingenuity, but their rye whiskeys are especially compelling and the five-year bourbon is sure to be a hit.

Palate: Oak, leather, heavily peppered creamed corn. It starts sweet and finishes dry. Despite relatively low alcohol content and a thin mouthfeel, it leaves a savory tingle across the tongue.

I don’t love this whiskey, but I like it and it’s well worth the price. Ultimately, it’s very approachable, mild, and pleasant. I’m more excited, though, about Stein’s ryes and hope to review them soon.

256
Shares
665
Views
Share on FacebookShare on TwitterGet Our Newsletter
Get The Glenlivet 18 Year Old at ReserveBar. Shop now!