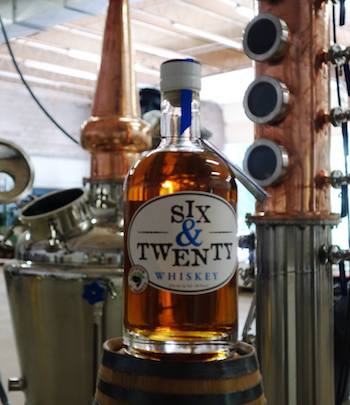 South Carolina, legally one of the more forgiving Southern states when it comes to distilling, is home to a burgeoning artisan distillery scene, complete with a “whiskey trail” for curious tourists to check out the state’s distinctive wares. Part of this up and coming beverage scene is Six & Twenty Distillery.

Owners and former rugby teammates, David Raad (called simply “DR”, we’re guessing for convenience) and Robert “Farmer” Redmond (for disposition?) come from a mythical Carolina distilling pedigree. Farmer’s great great uncle was an infamous moonshiner, Major Lewis Redmond. Legend has it that during Prohibition, Redmond Senior’s creations were so beloved he managed to barter his distilling skills to stay out of jail.

Farmer’s moonshiner uncle isn’t the only mythical character associated with Six & Twenty Distillery. The name comes from Carolina legend, as well. This story is about a Cherokee woman, Issaqueena, who fell for a white man, and road a horse 96 miles to warn him about an impending Cherokee attack. She named landmarks on the way by how far they were from her village. Six & Twenty is 26 miles from her original village.

DR and Farmer started Six & Twenty in 2012 with their unaged Virgin Wheat Whiskey and Blue whiskey. “We named it Blue after the old wedding tradition,” says Redmond. “Something old is the Kentucky bourbon, something new is the virgin wheat whiskey, something borrowed is time in a barrel, and you come out with something blue.”

Hand labeled and bottled, Six & Twenty Distillery now makes four varieties of whiskeys from locally sourced grains (from their website: “all South Carolina grains; soft red winter wheat and corn from the Upstate, rye and malted barley from the Midlands, and rice from the Lowcountry”) as well as gin, vodka, and “Carolina Cream.”

Vital Stats: This blended whiskey is 90 proof, 45% ABV, made from Carolina red winter wheat, married with five-year-old Kentucky bourbon in small barrels for “a few months.” Retails for $59.99.

Appearance: This spirit is bright butterscotch in color, light in body, with thin, fast legs.

Palate: Flavors of fresh yeast and pancake batter mixed with nutty butterscotch and charred Cracker Jack finish in lingering spicy white pepper and light cardamom. This whiskey is very complex, but not perfectly integrated. Between the overt spice and other notes, it can taste like two different whiskey styles competing as it rolls across the palate.

Despite the folklore and tall tales, this is a solid whiskey. Issaqueena or no, Six & Twenty Blue provides an interesting and enjoyable sipping experience. The complexity may come from the blending, but the flavors are quite satisfying and smooth.