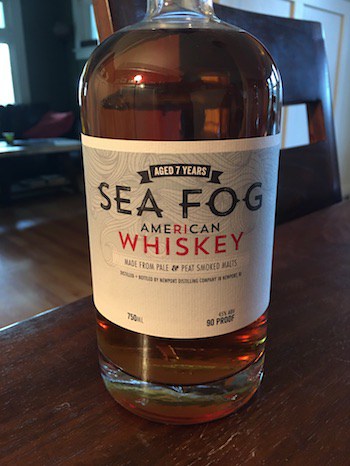 It’s no secret that whiskey is still popular, and only getting more so. As of April last year, there were more than 1,000 operational craft distilleries; that figure is likely even higher today. And a 2014 piece in Fortune claims American whiskey exports jumped from $376 million to $1 billion between 2003 and 2012.

All in all, it seems like everyone and their mother, or at least great-great-great-great-grandpappy, is making, has made, or will be making a brown liquor. And not just experimenters out of their basements, but established fermenters as well.

Newport Distilling Company has been around a while, and now they’re getting into the whiskey game with Sea Fog American Whiskey, a new single malt that they bottle and distill. Newport makes various kinds of beer and, for the last decade, Thomas Tew Single Barrel Rum. In the summer of 2016, Newport came out with Sea Fog, made from ale and peat-smoked malts.

The whiskey is inspired by the practices of distillers from the British Isles, blended with American traditions, says a press release from the distillery. Using pot stills and a beer made from pale and peated malt, the whiskey shares many of the qualities found in Scottish single malts. The whiskey is aged in used Kentucky bourbon barrels, though the length of time’s a bit confusing: The bottle says seven years, while online sources claim eight. It’s 90 proof and a 750 ml bottle costs about $50.

Palate: There’s a firm correlation between smell and taste with this whiskey. The extinguished campfire vibe carries throughout, though there’s a slight sweetness at the end, like candied pecans or boozy fruitcake. Perhaps that’s somehow the ghost of the rum influence? Overall, however, this is definitely a chop off the old Scotch block. It’s peaty, though not incredibly smoky, and it sure tastes like a single malt.

Personally, this doesn’t light my fire. I’ve never been a big single malt fan, but at least it doesn’t taste like I’m gnawing on a fire pit. If I must journey down single malt road, it’s fine, I guess, but I’ll likely save it for the peaty peeps when they show up at my house seeking sustenance. And I think even if I were a single malt drinker, I might find this…just okay, but not all that remarkable.