When I think whiskey, I don’t always think of Michigan. Okay, I’ve never thought of Michigan. But maybe I should! (So glad to be constantly enlightened by this whiskey reviewing gig.) Traverse City, located approximately where the Michgan mitten’s ring finger might be, is the home of the Traverse City Whiskey Co.

Now that Traverse City is in their own distillery, they make the Traverse City Whiskey Co. Straight Whiskey from a blend of in-house distilling and contract produced whiskey (also from MGP). Their American Cherry and Port Barrel Finish are made in-house. I tasted all three. 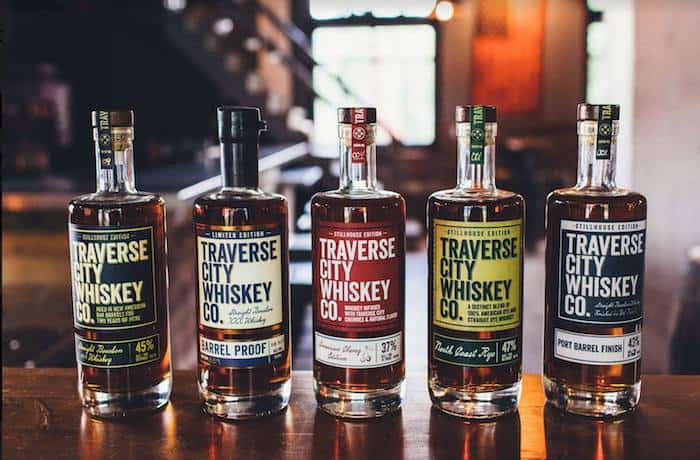 Nose: This is powerful! It smells stronger than 86 proof. Aside from the alcohol punch, there’s caramel, cocoa, cake batter, and a faint grassiness.

Palate: This is a little smoky—and not just because I tasted this during a very smoky time in Oregon. The slight grassiness in the nose also comes across in the palate. Tobacco, too. It’s not as forcefully alcoholic on the palate as it is on the nose.

Final Thoughts: It’s a nice balance of heat, too, and reminds me slightly of a scotch in its slight smokiness. It’s…fine. Pretty good, I’d say? My trusty tasting partner said it had the quality and drinkability of a Bulleit or other upper echelon ecomony whiskey, and I’d have to agree.

Appearance: Pretty! Auburn. Looks like autumn in a glass.

Nose: “Oh Jesus,” said my tasting partner after taking a whiff. This nose is 100% cherry cordial. If this doesn’t knock you over with its cherryness, then you have zero sense of smell. Also: Twizzlers.

Palate: Cherries on the palate, as well. Cherries here, cherries there, cherries everywhere. It doesn’t taste like cherry cordial—it’s definitely whiskey, but with a very, very, very strong cherry flavor. I love the idea of this, but I would want the cherry to be dialed down by at least half. The mouthfeel is nice, but it also brings to mind Cherry NyQuil. If Ludens and Old Crow went into business together, this would be the result.

Final Thoughts: I wouldn’t buy this, but I’d give it to someone who doesn’t drink whiskey, and who really, really loves cherry. That said, it does have some redeeming qualities (especially if you love cherry!). For example, I’d use it in a Manhattan but not as the primary whiskey; instead, I’d use a small dash here and there, like bitters.

Final Thoughts: It’s kind of ordinary. I’ve enjoyed other cask-aged whiskies, and this isn’t one of them. It’s inoffensive, but just okay. Fine in the shrug kind of way–and I don’t mean the sweater.