Real American whiskey aficionados would know that the Battle of Bower Hill was the only bloody clash during what is commonly known as the “Whiskey Rebellion.” During the Revolutionary War, the Americans racked up a large debt by fighting the British. In 1791, the newly formed American government led by George Washington instituted the first-ever tax on domestically produced spirits to pay the war debt. This tax impacted whiskey the most, since it made up the largest quantity of spirit produced in the States.

As you might imagine, the people didn’t like this idea very much, and many distillers decided to resist it, primarily on the grounds that it was taxation without representation. As the government started issuing writs to collect unpaid taxes, some violence occurred in southwest Pennsylvania. Ultimately a large group of rebels went to Bower Hill and surrounded the home of a federal marshal that was responsible for collection. A gunfight ensued, and a handful of rebels and federal officers died before the marshal surrendered. After many more incidents, the government crushed the resistance and the Whiskey Rebellion was history.

This type of history is one of my favorite things about drinking American whiskey, and today we have three bottles that remind us of that key moment in time. Not much can be found about the story of the spirits themselves. The bottles say they are distilled and aged in Louisville, and then selected and bottled by Bower Hill Distillery in Silverton, Ohio. However, no producing distillery is named, and there is only a bit of a web presence for the brand.

What this usually means is that a group of investors source whiskey from an undisclosed place, and then get to work on a marketing plan. All indicators point to that being the case with Bower Hill, but the big question is: how does it actually taste? We explore that concern in this review as we check out three of the four labels in the Bower Hill whiskeys brand, which include Single Barrel, Barrel Reserve, Barrel Reserve and Reserve Rye. 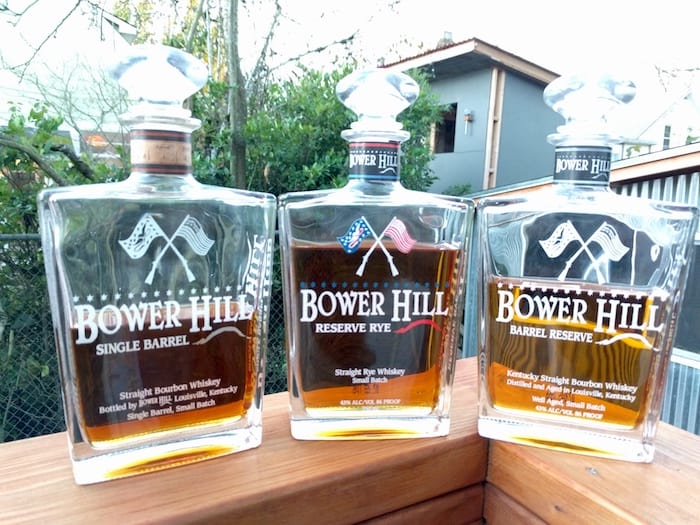 Nose: The aroma is pretty nice, dominated by white chocolate, butterscotch candies, #2 pencil, and raisin, with no heat. There is a faint vegetal note in the background that is distracting when you catch it.

Palate: Drinking neat, there is a noticeable prickly heat up front that is expected for 94 proof. It’s pretty balanced in the mouth, with notes of raisin, stone fruits, and sawdust, and a pretty nice medium long finish with hints of butterscotch and ripe plum. A few drops brightens up the nose, with green grape and toasted oak notes. It’s smoother on the palate, has less heat, and more white chocolate in the mouth with a cleaner, shorter finish. A splash of water brings more pencil to the nose, with less fruit but more cinnamon and oak on the tongue, and a slightly sweeter finish.

Overall I liked the aroma when the vegetal note was not as easy to detect, and the white chocolate kept me reaching for the glass. Recommended with a couple drops, but all configurations had something to offer. However I would expect a lot more at this price point.

Nose: There is a strong green Jolly Rancher scent right up front, with cane sugar and fresh wheat bread around the sides.

Palate: On the tongue, the first impression is that there isn’t much to it. I get a plastic-y note over the top, with raw walnut, a hint of angel food cake, and some slight solvent notes, with medium heat and a clean, fast finish. A couple drops of water takes the green Jolly Rancher down a notch and adds toasted coconut on the nose. Mid-palate sweetness seems to linger longer on the finish, the heat is in check, and a memory of sugar snap peas enters very late. Still not much to the flavor, with the same notes, just more diluted: plastic and solvent. A splash of water further mutes everything, but doesn’t change much.

I was pretty disappointed with this offering. The acetaldehyde, plasticy, and solventy notes were unappealing, and there was not enough left to balance it out. Recommended with a couple drops of water, but I’d avoid, especially at this price point.

Nose: The aroma here is navel oranges, honeydew melon, pine cone, with no heat. It is very inviting and enjoyable to sniff, especially the pine.

Palate: Big rye presence up front (not surprising). It’s a bit spicy, and pretty flat and smooth in the mouth. There is an overlay of caramel and freshly cut wood. Finishes really clean and snappy. A couple drops of water brings the wood forward on the nose and the mouth, while the melon and pine retreat a bit, and a tobacco note emerges. It’s punchier and livelier on the tongue, less sweet, and exits a little slower. A splash of water completely smooths it out but becomes a touch thin, makes it somewhat grassy on the nose, and washes the good stuff out with it too.

The aroma on this is really nice, and it is the best of the lot overall. I would recommend drinking it neat. However, all of these are totally outclassed at their respective price points.

100
Shares
2.7k
Views
Share on FacebookShare on TwitterGet Our Newsletter
Cheers to the Dads! Personalize a bottle of his favorite whiskey to create a modern gift for the modern man. Use code: FATHERSDAY20 for $20 off your next order of $100 or more at ReserveBar