Editor’s Note: Beginning with this review we’ve added a “buy now” button at the end of these types of articles in case you want to acquire a bottle for yourself. We’ve had an existing text buy link for sometime, but hope this new tweak will make it easier for you to access retailers who carry these whiskies in inventory.

Albany Distilling, founded in 2011, gathers its inspiration from the tumultuous history of Prohibition, and the “indominable spirit” and “modern innovation” that grew throughout upstate New York as a result of those dark times.

The impetus to open their doors, however, came about in a much humbler fashion. Two drinking buddies, John Curtin and Matt Jager, were discussing distilling over a pint in their favorite Albany, New York beer bar, the Pump Station, and noticed that the space next door was available.

Roughly one year later, they utilized the New York Farm Distillery law to assist in bringing their Prohibition-inspired traditions to their local community, sampling and selling spirits made from 100% New York-grown ingredients. This dedication and enthusiasm paid off shortly thereafter.

With craft spirit enthusiasm on the perpetual rise, it’s an apt time to delve in to the wonders of upstate New York whiskey to find out if a rich tradition of moonshining and a rebellious, creative spirit is enough to truly push their brown lineup in to the world-class ranks.

Note that for this round up I’ve rated the whiskies from least favorite to most. 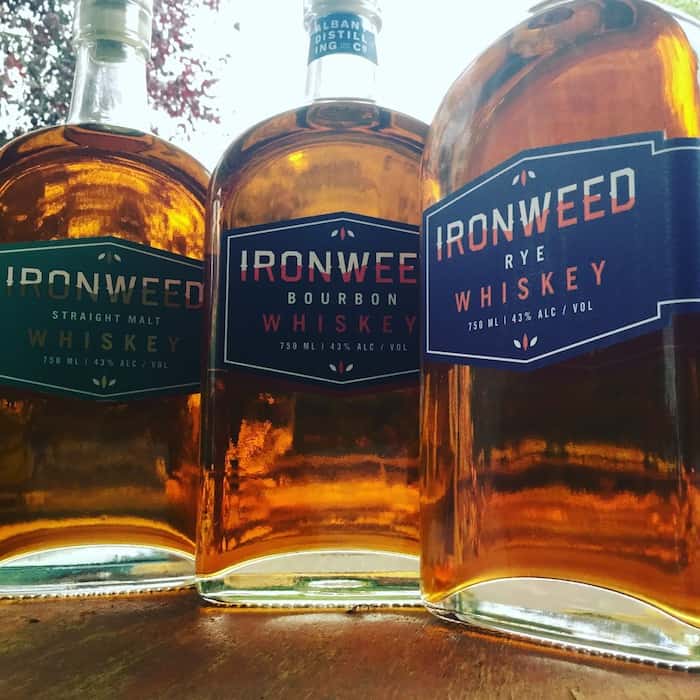 Pours a dull amber with sufficient clarity, but the aroma catches me off guard. An overpowering battle of particle board and dry dog food causes me to shy away from the glass. The overoaking is apparent, and hides any nuances left behind from the heirloom grains used here.

The palate benefits from the two years on oak, however, as it lends an appropriate velvety texture and a tames the heat of this beverage. The up-front is a bit muted, surrounded in a cloud of oak dust, but the finish brings nuances of lemon pith and a brief wave of light caramel. There is potential here, but the absence of any flavorful excitement on the front-to-mid palate leaves me wondering what this pricey bottle has to offer.

The darkest of them all, the rye pours a more foreboding amber with touches of maroon in the heart of the glass. The aroma on this one is another mind-bender, with an unfortunate giant dose of fusel alcohol up front that gravitates between new car smell and Super glue. Still, there is a glimmer of caramelization in the nose that inspires hope for the first sip.

Once it hits the palate, however, the product becomes much more cohesive. This is surely and unexpectedly the sweetest of the three, with the first sip sending the brain Fruity Pebbles sense-memory synapses and finishing on the palate with a hint of the fusel that accentuates the earthy, szechuan peppercorn-like bitterness in the linger. A more traditional rye flavor builds with additional sips, and an element of charred bread crust also develops. A pretty good rye minus the intensely over-boozed aroma.

Similar amber color to the Straight Malt, but in this case the aroma is much more pleasant. Initial wafts bring forth black cherry notes as well as a tangy, almost cedar-like wood expression, and umami-like tinges of mushroom, grass, and earth. Lacking a bit on the traditional, desserty side of bourbon, but that’s ok.

This whiskey hits my palate with some very unique sweet-seeming flavors including milk chocolate, prunes, and Christmas butter cookies. Enjoyable repeat sips bring out a blossoming flavor profile, and water does wonders to float these to the surface. The oak is in great balance and the finish has appropriate levels of burnt sugar and heat to remind the drinker that this is, indeed, bourbon.

For a five-year-old distillery, Albany seems to be progressing in the right direction. Some subtle tweaks, primarily in the realm of oak aging, may be in order to further evolve the consistency and quality of these liquids. For two guys with little experience in distilling and a big dream, these five years have gotten the Ironweed line to a very hopeful place with room for improvement.

113
Shares
1.2k
Views
Share on FacebookShare on TwitterGet Our Newsletter
Get The Macallan® Rare Cask at ReserveBar. Shop now!