As someone who runs marathons, I’m a little tired of having the term “marathon” applied as a suffix to words it doesn’t belong with. Movies. TV shows. But apparently I’m good at marathons, because after One Eight’s tasting marathon, I’ve just completed another: Heritage Distilling.

Heritage Distilling is a craft distillery based in Gig Harbor, Washington. According to their site, they are the most awarded craft distillery in North America by the American Distilling Institute three years in a row (2014, 2015 and 2016) – basically every year they’ve been in existence. 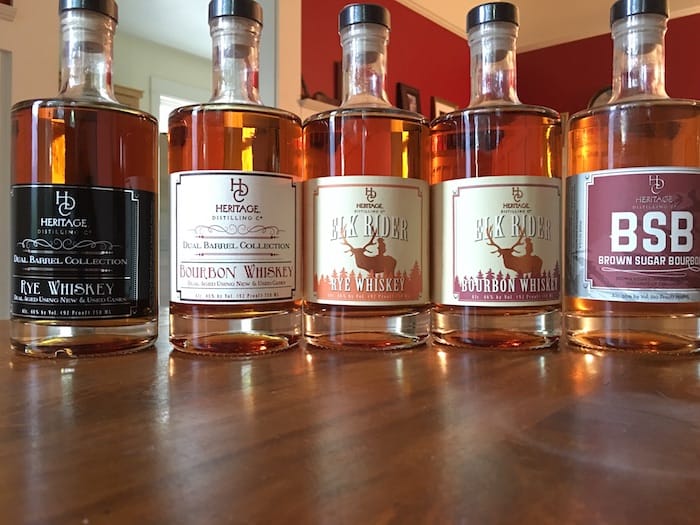 In addition to whiskies, Heritage Distilling also makes gin, vodka, and a line of diversely flavored vodkas such as blueberry, hibiscus, and bacon. You can also buy a ton of other stuff on their website, including branded merchandise, a spirits advent calendar (hey, the holidays are coming!), and party kits.

Big props to Heritage Distilling for being family-owned, majority owned by women, and for having a website that engagingly explains the distilling process to the layperson. When I see this varied of a product list, I’m a little skeptical, but all those awards and their commitment can’t be wrong, right?

The Elk Rider series is named for the family of Heritage’s founders, who broke wild elk. The Elk Rider Rye is aged for less than two years in new American Oak charred barrels. It’s 92 proof and sells for $40.

Nose: Very subtle, like aftershave on a guy you like at the end of a very, very long day.

Palate: The taste is mild and subtle, but I like it. It’s easy, it tastes like quality. If you like a Manhattan that’s on the mild side, go for it, but I feel like vermouth could compete with its pleasant taste. Maybe if you go easy on the bitters, too.

Finish: Not much teeth, but I like that. It’s a consistent flavor profile the whole way through, with a faint smokiness.

Apparently it does make a good Manhattan because I came home one night and found it had been used for a party. Now I know what a teenager’s parent feels like.

A corn, rye, and malted barley mash, this is barreled at less than 125 proof for under two years in new American Oak Charred Barrels. It’s $35 and 92 proof.

Color: Glossy. Like honey held up to the light, or the color of a Vitamin E capsule.

Nose: Similar to the Elk Rider Rye, but I can smell the sugars in it a little more. Also: seawater and cantaloupe.

Palate: Spicier on the palate than I would have thought, but there’s no bite or sharpness to it.

This is a delight. Rich, creamy, and nutty, It really is like a dessert without being a dessert wine. I’m going to hoard it away from the Manhattan-makers. I’ll leave them the Maker’s instead.

Heritage’s Duel Barrel collection is aged in new charred oak barrels and then rests again in premium used barrels that held pure vanilla extract. The rye sells for about $32 and is 92 proof.

Nose: Sweet, for a rye. Caramel. The vanilla extract-based aging is very apparent. Butter, with faint citrus. Paper, hot off the printer.

Palate: Oh, this is interesting! It’s a rye that tastes like a bourbon. It’s perfectly balanced between the slight chew of a rye and a lingering sweetness of a good bourbon. I could have stopped here if I didn’t have others to taste.

Finish: I can see myself having a tipple of this after a hard day or even an easy one. Sweet, smooth, and extremely drinkable. It’s not as forward in its secondary aging like some other flavor-imbued whiskies, and it’s just such a treat.

Heritage’s Duel Barrel collection is aged in new charred oak barrels and then rests again in premium used barrels that held pure vanilla extract. It sells for about $29 and is 92 proof.

Nose: Not as sweet as the rye, which is a bit perplexing; I thought it would be the other way around. Like a floral sake mixed with the leather of a brand-new shoe.

Palate:  This is smooth, but it’s not as engaging as the rye. It has more of a cider quality, with strong vanilla at the finish. Applesauce!

Finish: The rye has enough going on so that the vanilla doesn’t overpower it, but the bourbon is not as lucky. It’s not like drinking a bottle of vanilla extract or anything like that, but compared to its sibling, this comes up short.

It’s nice, but very…quiet, if that makes any sense. This isn’t a bourbon that talks out of turn in class.

Made from a corn/rye/malted barley mash, this is barreled for less than two years in new American Oak Charred Barrels. It’s then cut to 60 proof and natural brown sugar and cinnamon flavors are added. It’ll cost you about $30.

Nose: As if I stuck my nose into a box of brown sugar. Or breathed in the cinnamon ice cream at Cold Stone Creamery (do those still exist?).

Palate: Syrup. Diabetes approaching. If you want whiskey as a cordial, this is it. There is absolutely nothing savory about this.

Finish: This is whiskey for people who aren’t whiskey drinkers. I would pour this over ice cream. We tried to light it on fire but it was too low-proof.

Why do people insist on making whiskey kitschy? It’s whiskey. For the love of all that is holy, please let it be. O the flip side if you absosmurfly require a flavored whiskey, this is…the best of the worst? It’s won several awards for best flavored whiskey, so it’s got that going for it. And it’s not bad. I don’t mean it as a backhanded compliment, but it’s just not—in my opinion—whiskey.