Long Island Spirits lays claim to being “Long Island’s first craft distillery,” which, since Prohibition, it technically is. The North Fork region of Long Island, New York has a reputation for its vineyards, farms and nurseries — so it only makes sense that a craft distiller would find a welcome niche in the area as well.

Located in the town of Baiting Hollow, Long Island Spirits is headquartered in a restored historic barn that dates back to the early 1900s — and its colorful history includes Prohibition-era involvement, when the North Fork was said to be a bustling transportation hub for bootleggers.

Founder and owner Rich Stabile had an interest in distilling and pursued education and immersion in the process, but he ultimately points at 9/11 as being his real turning point to focus his efforts on his passions and travel less frequently. Thus, he brought Long Island Spirits to life. He opened the distillery in 2007 and first focused on its LiV potato-based vodka, which — like all of its spirits — is produced in small batches from local agriculture.

Eventually, the “field-to-glass” distillery began expanding its line to include other spirits. From 2007 to 2017, Long Island Spirits’ production reportedly increased thirty-fold, and still continues to grow. Notable among Long Island Spirits’ non-vodka liquor is its line of whiskeys, including its Rough Rider ‘Bull Moose’ Three Barrel Rye Whiskey.

This rye is named in homage to Teddy Roosevelt, who was both native to Long Island and an organizer of the first United States Voluntary Cavalry — known as the “Rough Riders.” After surviving an assassination attempt, Roosevelt reportedly said “It takes more than that to kill a Bull Moose.” Hence — the name of Long Island Spirits’ rye was born.

Rather than using one yeast that produces a quick fermentation, Long Island Spirits ages its spirits with a variety of yeasts during fermentation for a slower and lower-temperature process, in an effort to impart more depth of flavor and overall character. Especially for a young rye, I was curious what the fermentation and aging processes would impart to the character of the spirit. 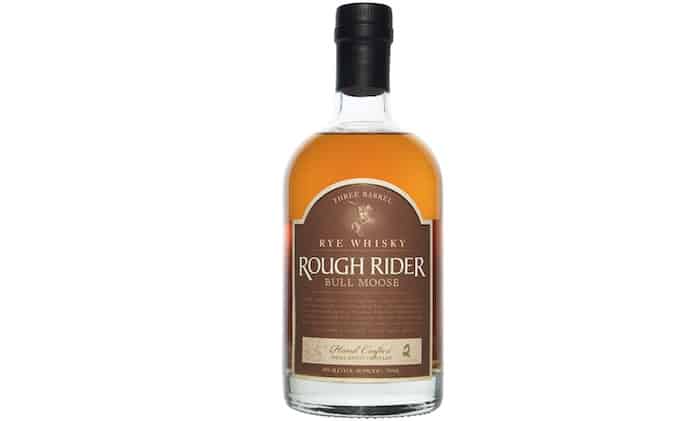 Vital Stats: With a mash bill of 95% rye and 5% malted barley, Rough Rider Bull Moose Three Barrel Rye Whiskey is, as it name indicates, matured in three different 55-gallon casks with the intention of producing a variety of specific qualities in the rye.

The barrels are New American oak casks (for a minimum of one year), Bourbon barrels (for three months) and finally barrels previously used to age the distillery’s Pine Barrens Single Malt (for three-six months). Bottled at 90 proof (45% ABV), this rye retails an average $39 for a 750 mL.

Palate: A surprising touch of sweetness upfront whispered of vanilla and berries quickly made way to a pleasant, crisp and building heat of cinnamon spice that fills the mouth and throat, with a slight citrus tang on the tongue.

This rye is easy to enjoy. It's simple -- which is expected of a whiskey of its age -- but doesn't have the harsh qualities sometimes found in other young spirits. And there's just a little something more lurking beneath the surface, in a very pleasing way. The gentle malt tones and presumably the dynamic aging process lend itself well to mellowing and smoothing this out. It does well with to the addition of a splash of water or a rock or two, to further temper the rye, and also holds its own mixed into a Rye Manhattan.