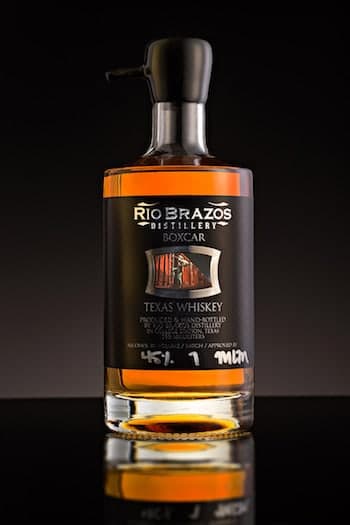 Oh, no, I thought, as I read the label. “College Station, Texas.” I knew College Station was home to a university, I just didn’t know which one. A quick search disclosed Texas A&M. Not necessarily a bad thing, mixing agriculture with the military. Unfortunately, I could only think of a distiller, in this case the Rio Brazos Distillery, brewing for the lowest common denominator, the infamous and uneducated “college crowd.” You know them. They’re the ones screaming at the camera that their team is Number One!

Rio Brazos was established by Nathan and Wade Barkman, owner- operators of the Republic 1836 Steakhouse, and opened officially in early 2014. This was a filly operation, another, seeming, reason for concern.

However, their website stated something mildly more sophisticated: “Boxcar Texas Whiskey is blended in very small batches from a selection of whiskeys distilled from corn, rye, and malted barley. Selected for their softness, dessert-like flavors, and drinkability… The final blend is filtered through coarse charred pecan wood, revealing a light, bright spirit that is as unique as it is versatile.”

Well, that sounds intriguing, and their bottle is aesthetically pleasing, particularly with the black wax top a la Maker’s Mark’s distinctive red. I feared though the money spent there had been lost in the product—a consistent concern and fear. My grandfather, a venerable veteran gambler and drinker, would say, “Give me an ugly mare that can runs miles with a smile, rather than a pretty pony that can’t even get out of the gate.”
And, again, that’s what I feared—Rio Brazos was attempting to “pretty up their pony,” aka “putting lipstick on a pig.”

Yes, the black wax was aesthetically pleasing, but came completely off in large, jagged junks, and was nothing short of annoying. As Grandfather would say, “If I knew I was going to have to arm wrestle her, I wouldn’t have bought her a drink.”

Once I’d fought, dealt, and finally won the war with the black wax I was able to get down to business—throwing a saddle on their horse and putting spurs to it. Yea-haw!

What I immediately discovered, just on the nose, was remarkably subtle and, nay I say, nearly ethereal. For there really was not much nose, only the slightest hints of soft vanilla and spring honeysuckle.

I smiled and tasted.

Nose: Soft, vanilla with an undercurrent of spring honeysuckle.

Finish: Long with a slight lingering of caramelized heat, but in no way unpleasant.

This is a horse, even without a saddle or bridle, I’d be happy to ride. The only reason I didn’t go higher on my rating is these are blended in small batches. My batch, #10, was delicious. That’s not to say other batches will be more or less delicious. Consistency is my concern. Time will tell.