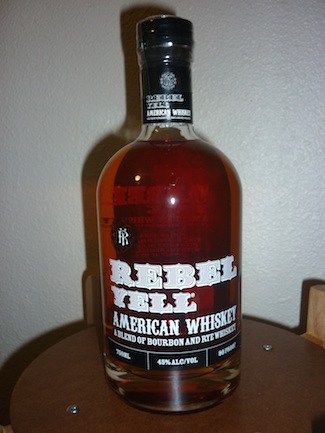 Rebel Yell is an established brand in the bourbon industry, operating since 1849 in Louisville, Kentucky. It has long had a reputation for releasing undistinguished whiskey, but recent efforts are at work on rebranding the image and raising the popularity of the distillery.

We recently had the chance to review its core bourbon, not finding it to be incredibly remarkable, but there are also some other whiskies in the brand’s stable, a newer one of which is its American Whiskey. This is a 90 proof blend of bourbon and rye whiskey that attempts to combine the best qualities of Rebel Yell Straight Bourbon and Rebel Yell Rye. The ultimate result of this marriage of whiskies is a somewhat unique and exciting drink that is still forgettable and bland.

This whiskey is aged for only two years, giving it a comparatively short amount of aging relative to most whiskies, which generally are aged for at least three years. However, the color is still surprisingly dark, with a moderate amber hue. Inhaling, one immediately notices the prominent woody scent that harkens back to the flavor released from the oak barrels it was aged in, followed by strong notes of vanilla, leather, and cinnamon. That the smell is so diverse is expected, considering that wheat, corn, rye, and malt make up the mash.

The first impression one has when tasting is the powerful and somewhat intimidating spiciness on the palate, due to the presence of rye. Rye initially dominates the palate, but then gives way to undercurrents of orange, vanilla, and oak. Hints of oak and chocolate are also palpable, though in lesser quantities. The flavors arrive like waves, and the spicy notes take some getting used to. Bulleit Frontier whiskey has a similar effect. Disappointingly, the taste fades very soon when compared to most other whiskies. It’s surprising how light and brief the flavor is, and all the more shocking since this drink combines two whiskies in an attempt to make something bold and multiflavored.

Rebel Yell American Whiskey tries to hedge its bets and give consumers both rye and bourbon, but it succeeds in neither respect. The overall effect on the palate is brief and minimal, and the taste has no unique profile. Blending rye and bourbon creates unimpressive results, and while it has some merits, no one is missing out on much by not trying this.

Overall I give this whiskey a rating of 75.