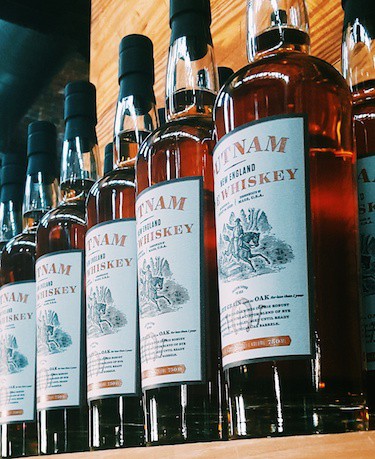 From the name of the distillery to the historical building it calls home, Boston Harbor Distillery is carefully aligned with regional Massachusetts history. Adding some heft and leverage to these local ties is the fact that this distillery was launched in 2015 by CEO Rhonda Kallman.

While she describes whiskey as her “first love,” she is likely better known for co-founding the Boston Beer Co., maker of Samuel Adams, and later New Century Brewing Co. This also adds Boston Harbor Distillery to the growing number of craft spirit distillers helmed by women – once an anomaly in the industry – as well as the growing number of distilleries linked to craft brewing. Others include Ballast Point, Leopold Bros., and Southern Tier and Dogfish Head.

Interestingly, of Massachusetts’ 18 current craft distillers, more reportedly source local ingredients exclusively (10) than not (eight). Boston Harbor Distillery seems to fall into the latter category. Putnam New England Rye Whiskey, the only whiskey in the distillery’s core offering line, is made from re-distilled, unaged rye whiskey that was sourced from the Midwest (MGP perhaps?).

Vital Stats: Putnam New England Rye is re-distilled in Boston Harbor Distillery’s handmade copper pot still from new make rye brought in from the Midwest, with a mash bill of 95% rye malt and two-row malted barley making up the remaining 5%. Aged in 53-gallon new American oak barrels (Char #4) after being removed from the still at 155 proof, it is bottled at 86 proof and priced around $50.

Nose: Softer than expected, a few swirls elicits a tingling herbaciousness, with a touch of cooling mint and a suggestion of freshly baked yeasted rye bread.

Palate: This is a milder, smooth rye, that builds in spice as it finishes. Notes of whipped honey and Madagascar vanilla initially emerge and precede any substantial heat. Some more subtle complexities and spice lie in the aftertaste – white peppercorns, cardamom, cinnamon toast – but don’t overpower, with a warmth that spreads inward.

Boston Harbor Distillery describes their Putnam New England Rye as “Big. Chewy. Spicy.” I have to respectfully disagree with the boldness implied in these words – but that doesn’t mean it isn’t a solid, enjoyable rye. I’d be more inclined to use the words “Light. Smooth. Warm.” Using Templeton Rye as a comparison, in this case with a similar mash bill, Putnam New England Rye certainly has some overlap in flavor and feel but rises above with a more dynamic finish.

Perfectly pleasant sipped neat, Putnam New England Rye is nicely enhanced with the addition of one or two small rocks and a splash or orange or Angostura bitters.

30
Shares
1.8k
Views
Share on FacebookShare on TwitterGet Our Newsletter
Get The Macallan® Rare Cask at ReserveBar. Shop now!