OOLA Distillery, located in Seattle’s Capitol Hill neighborhood, draws its inspiration from the grain-to-glass movement. In the eyes of its owner, Kirby Kallas-Lewis, it also serves as a commitment to its neighborhood and an institution for exploring his love of distilling and personal intellectual curiosity. With flagship vodkas and whiskeys made from Washington-grown wheat, and an aging process that claims to be infused with the saline air of Puget Sound, OOLA flows smoothly into the world of unique yet tradition-inspired small-batch craft distillers.

In June of 2015, however, OOLA took a turn for the experimental through the launch of their Whiskey Discourse program. According to the distillery, this program “refers to a series of ‘conversations’ in whiskey making traditions that are treated in innovative and unconventional ways.”We wrote about the third release in the series, OOLA Three Shores, this past February. 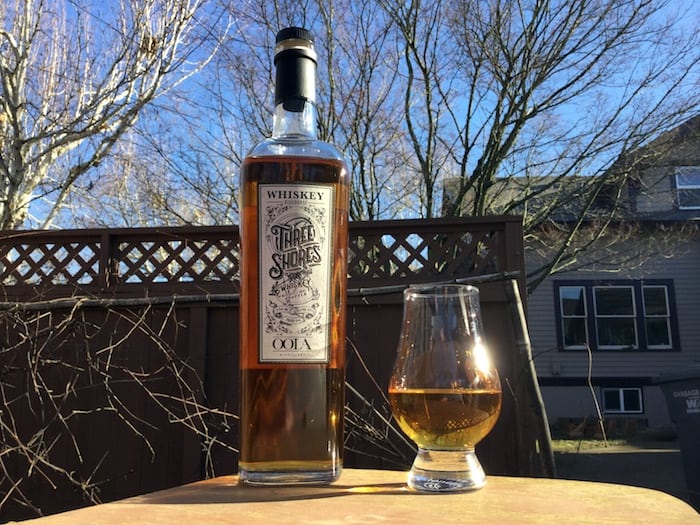 OOLA Three Shores World Whiskey is a blend of three different whiskeys inspired by the whiskey making traditions of Canada, Scotland, and the USA. As the bottle states, “a Highlands Scotch is right at home with its North American friends: a sweet, smooth Canadian Whiskey and our high rye American Whiskey.”

The American component is house-distilled, and OOLA divulged their other source materials during a quick phone call: a three year lightly peated Scotch from the Loch Lomond area, and a three year high rye from Alberta, Canada. The ‘guest’ spirits are barrel-aged at OOLA’s facility for an additional year to introduce their signature oak and terroir flavor profile to each component.

Prior to this release, OOLA has released an experimental whiskey finished in Cabernet Sauvignon barrels, and a smoked whiskey made with malt that was house-smoked over cherrywood and used bourbon casks, then backblended with a smoky Highland Scotch.

Appearance: Golden yellow with hints of burnt straw. Liquid contains some small floaty flecks. Legs are good and strong, looks like a glass of sunshine.

Nose: Immediately hit with an alcohol heat and a dull acrid note of dirty ashtray. Continued breaths bring forth an aroma of dried banana chips accented by light toffee and a most-likely-imaginary hint of sea water.

Unfortunately, the complex smokiness of Scotch and the sweet, dessert-like aromas of vanilla found in bourbon-inspired whiskies are missing or muted here, as the nose comes off mostly like the expected muddled mess.

Palate: The depth of flavor in this whiskey on the palate saves it from the sloppiness of its aroma. An expected heat takes control for the first couple of sips, but it’s warming and viscous and not at all unpleasant or nakedly hot. The banana element of the aroma is initially an unpleasant, combative note layered through the heat of the first sips, but fades to the background as round notes of sweet smoke, hay, and a oddly pleasant yet funky hint of moldy basement continue to build on top of the initial palate.

I could sit here all day picking out the unexpected flavors: new carpet, peanut skins, heavy minerality – and this circus of taste maintains a level of interest.

Interesting experiment, not successful. I’d venture a guess that all three of the starting points for this whiskey are greater in quality than the sum of their parts. The internet tells me that the next release in their ‘Whiskey Discourse’ series will be this same juice with an additional year in those Cab Sauv barrels mentioned earlier. I think this will help gift-wrap this package, and I look forward to revisiting these flavors with an additional 365 days of rest.