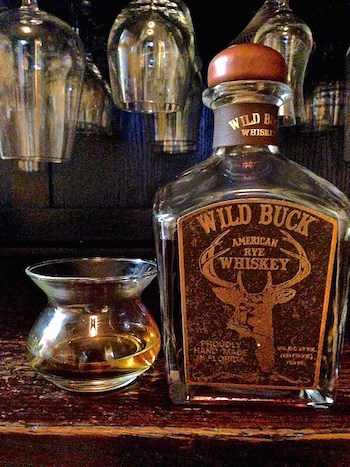 Made by Njoy Spirits, a husband-and-wife duo in hilariously named Weeki Watchee, Florida, Wild Buck American Rye Whiskey is a 100% rye whiskey aged in charred new American oak. The owners are dedicated to doing everything themselves, from grinding and mashing their grain to hand-bottling their product, and take obvious pride in their whiskey. They even grow some of their own rye, while sourcing the rest from a local Florida farm.

There is no age statement on the bottle, but it competed in the “Aged Less Than 1 Year” category at the American Distilling Institute’s competition, and the flavor definitely suggests that it is on the young side.

The 100 proof whiskey, sporting a color that is dark, reddish mahogany and almost wine like, is handsomely packaged in a robust, decanter style bottle with an embossed wooden topper. Unfortunately, the cork seems to leave some kind of residue on the lip of the bottle that makes its way into the glass unless the lip is wiped clean after each opening.

Nose: Hints of ginger, bread crust, vanilla, and Brach’s caramels are masked by an intense woodshop aroma. The grain character is dampened, both figuratively and literally – there’s a kind of musky wetness to what little of the rye aroma I can pick up through all the sawdust. Adding water tames the wood a bit but accentuates the wet cardboard/new make notes.

Palate: Some nice candied ginger on the entry, but heavy oak as well, tight and astringent. There is a somewhat vegetal, tequila-like note that becomes more noticeable in the brief, tart finish. Not as fiery as the 100 proof would make you think, with the finish dominated by drying oak rather than alcohol burn.

While I love to root for small craft distilleries, unfortunately Wild Buck Rye Whiskey just isn’t suited to my tastes. It’s very heavily oaked, almost to the point of unpalatability. That heavy oak camouflages much of the rye grain character, leaving just a few understated notes of bread crust and caramel to pick out from the lumberyard blast.

As a small batch whiskey it’s possible I ended up with an off-barrel bottle, but sadly there is no batch or barrel information on the label. In any case, those who enjoy a ton of oak character in their whiskeys might like Wild Buck American Rye Whiskey a lot more than I did.

I give the Njoy Spirts Wild Buck American Rye Whiskey a score of 75. You can pick up a bottle of it from online retailers for over $50 here.