In my early years of craft beer drinking in the Midwest, New Holland beers were a treat. They have been at it for over 20 years now at a massive facility in Holland, Michigan, and in craft beer years, that makes them a legitimate legacy brand. In terms of beer, they continue to innovate and dial in favorites like Dragon’s Milk, their bourbon barrel aged stout.

They have also been doing spirits arguably better than any other beer-focused operation in America. Rather than resting on their brewing success, New Holland got into the spirits game after co-founder Brett VanderKamp took a trip to the Carribeana and fell in love with rum. He came back to Michigan motivated to start producing a range of spirits.

Since that time, New Holland has put together a range of spirits, including various rum, vodka, and gin releases. They have three whiskies, the most popular being their Beer Barrel Bourbon, which is a bourbon that is finished for three months in used Dragon’s Milk barrels. The other are the Zeppelin Bend series, the all barley straight malt whiskey being reviewed here, and the Zeppelin Bend Reserve, which is aged an extra year and then finished in sherry casks. 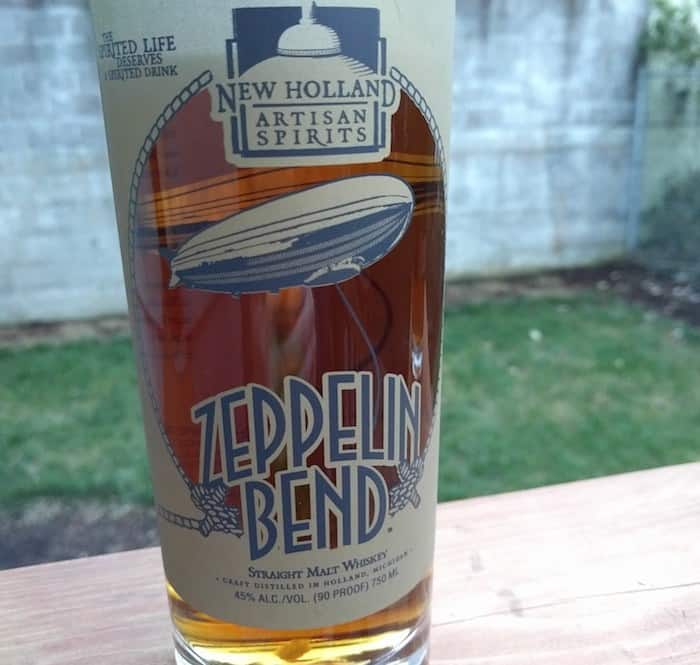 image via Will Meek

Appearance: This pours a crystal clear gold with amber highlights, and maintains a nice skyline on the glass with fast, medium legs.

Nose: The dominant notes on the nose are milk chocolate and cocoa powder, which are balanced by a hint of vanilla bean and straw. There is no heat on the nose, and although it is a bit flat, it remains pleasant throughout the pour.

Palate: The flavors closely follow the nose, with baker’s chocolate, and medium cocoa bar out front. The straw/husk/grain character is slightly hidden behind the sweetness, and there is a touch of vanilla and oak. Like the nose, the mouthfeel is fairly flat, and there are small flickers of heat around the mouth. The finish is sweet, again with a chocolate note, then clean, fast, and dry, with very mild heat.

This is a whiskey for chocolate lovers. The all-barley mash bill really highlights the pleasing character this grain brings to whiskey. The drawback is that it ends up as a fairly one-dimensional spirit, which makes multiple pours uninteresting.

Recommended neat, and as a solid changeup to a bourbon- or rye-heavy collection.