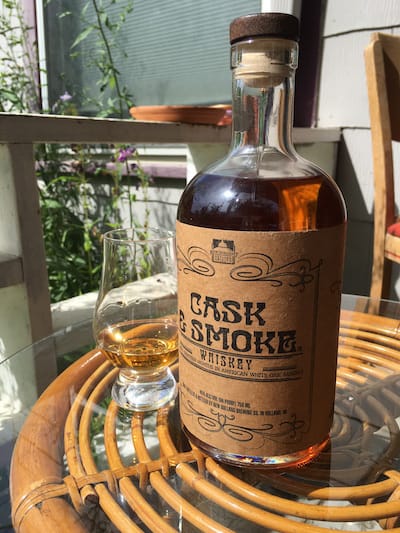 As a fan of both beer and whiskey, it seems like a no-brainer for a successful brewery like Michigan’s New Holland Brewing to not only turn to distilling, but also infuse brewing styles into its Brewers’ Series spirits.

As part of New Holland’s Brewers’ Series – “whiskeys that celebrate the beauty that a brewer’s wash and fermentation lends to the art of distilling,” according to the label  – Cask & Smoke is made from a marriage of 2-row American malted barley and peat-smoked barley from the United Kingdom, which is mashed and fermented in-house.

New Holland Cask & Smoke is then twice-distilled to 140 proof and aged in American white oak quarter barrels (15 gallons) for at least 18 months, then non-chill filtered.

The final product comes in at 90 proof.

Vital Stats: 90-proof with a mash bill of American malted barley and peated Barley from the United Kingdom, twice distilled and aged for 18 months in 15-gallon American white oak barrels. At least $40 per bottle.

Appearance: New Holland’s description of “bold copper” is apt while looking at the bottle, but once poured in the glass it comes closer to gold.

Nose: The initial whiff gives off a quick but gentle aroma of sweet citrus fruit, which quickly transitions to the charred-oak smokiness balanced by a sweet honey aroma, then finishing with a hint of peat smoke.

Palate: The first taste hits the tongue with the sweetness – and nearly the viscosity – of a drop of honey, but tempered by a hint of nutmeg. That again transitions to a smoky flavor, but while the nose is characterized by oak smokiness, peat smoke takes charge on the tongue and intensifies over time, but remains balanced by the spiced honey notes.

Swallowing leaves the sensation of a sweet, syrupy coating on the tongue and pleasant tingles throughout the mouth that occasionally flare up for another minute or so.

I’m not usually impressed by peated whiskeys, but New Holland Cask & Smoke blends that peat smoke flavor with the sweeter smoke of oak-barrel aging to delightful effect. While its flavor profile isn’t particularly complex beyond the blend of smokes, that blend alone – both in the nose and palate – impressed me.

The aptly-named Cask & Smoke isn’t likely going to revolutionize the industry, but it is at least worth a taste if not a  trip to the store for a relatively affordable bottle.