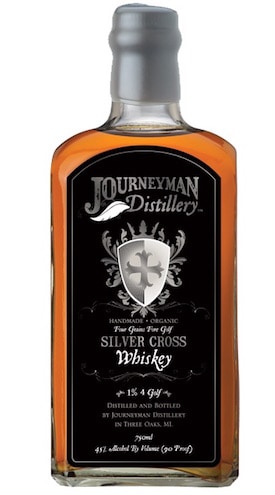 I’m not a golfer. In fact, I find the sport painfully boring to watch. So my reaction to finding out I was about to review a golf-themed whiskey was a perplexed, if not quite put-off, “huh.”

Three Oaks, Michigan’s Journeyman Distillery, which opened its doors in 2011, is a certified organic operation, one of the few of its kind in the country (their whiskies are also certified kosher for the whole year, including Passover).

The story goes that the game of golf took Journeyman founder Bill Welter to Scotland, where he began his love affair with whiskey. Hence, it’s fitting that one percent of sales from every bottle of Journeyman’s Silver Cross Whiskey goes to golf-related charities. Among them is First Tee, a nonprofit aimed at “providing educational programs that build character, instill life-enhancing values and promote healthy choices through the game of golf.”

Though I prefer watching faster sports with more participants, I do support the goal of giving low-income kids the chance to get outside and learn a new sport, so I can’t knock the distillery for supporting this mission.

In any case, the perhaps more substantive influence golf has on this whiskey is a numerical pun: the distillers, taking inspiration from a golfer’s shout, decided to make this a four-grain whiskey, using equal parts corn, malt, rye, and wheat. It’s a young whiskey, aged in five-gallon white oak barrels between four and six months, and is bottled at 90 proof.

In the glass, it’s deep copper with moderate legs—a little heavier, perhaps, than I might expect based on the whiskey’s age.

Nose: the nose is a real mixed bag, with fruity blackberry and pear mingling with warm baking spices, honey, and freshly-baked bread. All together, it smells like a bakery I wouldn’t be able to resist spending my money at.

Palate: warm and velvety on the palate, with notes of dark fruit, cinnamon, and toast.

Finish: the finish is grain- and spice-forward, and medium-length. After swallowing, a slightly bitter note not unlike hops lingers.

Overall, the word that comes to mind tasting Silver Cross is “rich.” Its well-balanced flavor profile is complemented by a just-right mouthfeel; it seems those extra-small barrels are serving their purpose, because I wouldn’t have guessed this is a young whiskey.

Score: 90/100 [SHOP FOR A BOTTLE OF JOURNEYMAN SILVER CROSS WHISKEY]