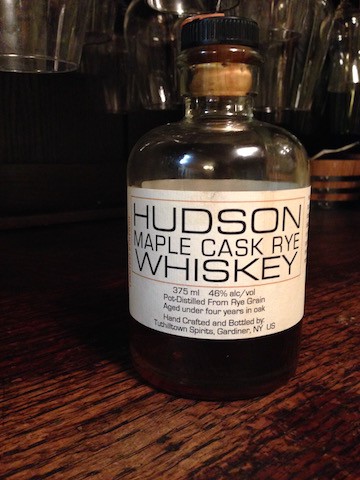 Editor’s Note: The bottle for this review was drawn from the private collection of our founder.

Located in a picturesque vintage barn in upstate New York, Tuthilltown Spirits wasn’t originally meant to be a distillery. In 2001, the now-distillers bought the property with plans to open a “rock climber’s ranch;” in true small-town fashion, the neighbors objected to the proposed property use, and ultimately the rock climbing plans were scuttled. Now, instead of climbing walls, they’re using the building to make high-end spirits (if I were that neighbor, I‘d count that as proof that a well-placed complaint works).

In addition to their regular lineup of gin, vodka, liqueurs, and bitters, Tuthilltown Spirits also offers a standalone whiskey line called Hudson Whiskey. The Hudson line includes bourbon, rye, corn, and single malt products made from local grains, and aged in small oak barrels. Tuthilltown Spirits had been selling their used whiskey barrels to a Vermont maple syrup producer that used the barrels to age syrup. This exchange provided the seed for their limited release Hudson Maple Cask Rye Whiskey, a 100% rye finished in barrels that once held Vermont maple syrup.

The Maple Whiskey segment is bursting at the seams these days, with spirits from Jim Beam, Knob Creek, Crown Royal, Vermont’s Saxtons River Distillery, Vermont Spirits, and undoubtedly others. Some of these products are lower-strength flavored whiskies, often close to liqueurs in terms of sweetness. At 92 proof, the Hudson Maple Cask Rye is still very clearly whiskey, with only minor sweetness from the maple syrup.

The bottle for this review came from Batch 1. Here are my tasting notes for it:

Aroma: In a fluted grappa glass, this whiskey has a ton of spice. Nostril-tingling oak gives way to red fruit, cherry Lifesaver, red hots, cinnamon, clove, and Christmas potpourri. In a Neat glass, there are more bass notes to pick out: wet log, swamp, woodpile, linseed oil, and the barest hint of maple, but only if you’re looking for it.

Palate: In the beginning, quite nice. The whiskey opens with sweet, dessert-like notes at first, with a strong cinnamon candy character followed by a lovely combination of rye and the smoky caramel of maple syrup. That pleasant entry is derailed, sadly, by an intense blast of charred, tannic oak culminating in a heavy, carbonic finish reminiscent of a charred barbecue rib. The effect is a leaden one, stripping away the pleasure of the midpalate and leaving a punishing dose of oak in its place. The finish is laden with oak and quite fiery, with the hot bite of very young rye.

Maple and whiskey is a natural pairing (try replacing the sugar cube in an old fashioned with a little glug of syrup – the real stuff – and see what I mean). My hopes for this bottle were high, but unfortunately it just failed to deliver. The oak character is incredibly intense; from the midpalate on this whiskey is dominated by young, raw oak, making it hard to pick up anything but the faintest notes of maple.

The packaging is beautiful and I like the distinctive stubby shape, but it’s hard to recommend this one to anybody interested in what’s inside the bottle.

I give the Hudson Maple Cask Rye Whiskey a score of 65 points. Should you want to hunt down a bottle, even though it may be a bit overpriced for what it is, there are a range of online retailers with it for sale.

[graphiq id=”l6P51OhGv9X” title=”Hudson Maple Rye Whiskey Overview ” width=”700″ height=”500″ url=”https://w.graphiq.com/w/l6P51OhGv9X” link=”https://whiskey.underthelabel.com/l/1830/Hudson-Maple-Rye-Whiskey” link_text=”Hudson Maple Rye Whiskey Overview | UnderTheLabel”]
212
Shares
3.2k
Views
Share on FacebookShare on TwitterGet Our Newsletter
Cheers to the Dads! Personalize a bottle of his favorite whiskey to create a modern gift for the modern man. Use code: FATHERSDAY20 for $20 off your next order of $100 or more at ReserveBar