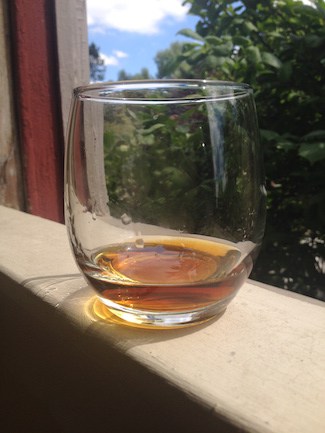 Editor’s Note: The Whiskey Wash welcomes Katelyn Best to our writing staff. Also, this whiskey was provided to us as a free sample to review by the party behind it. The Whiskey Wash, while appreciative of this, did keep full independent editorial control over this article.

Hillrock Estate Distillery, a relative newcomer to New York’s burgeoning craft distilling scene, isn’t the only operation that prides itself on a “field-to-glass” ethos. But this Hudson Valley distillery, which opened in 2010, is one of the few anywhere in the world that still floor-malts its grain on site.

As Hillrock notes on their website, almost all modern distillers “use ‘factory’ malt produced by a few large corporations focused on maximizing output and creating a homogenous product.” By contrast, the emphasis at Hillrock is on small batches, and every step, from the organic heirloom-variety barley and rye grown on the estate, to the malt house, to the distillery, is carefully controlled.

Situated on a historic estate surrounding an 1806 Georgian house built by a Revolutionary War captain, Hillrock distills a range of higher-end spirits. Their lineup includes a double cask rye and a single-malt whiskey, as well as a solera-aged bourbon, made with a process traditionally used for sherry where barrels are periodically partially tapped and topped off with newly-distilled spirits. And these whiskies come with an enviable pedigree: Dave Pickerell, former master distiller at Maker’s Mark, oversees the operation.

I sampled for this review the distillery only release of Hillrock Estate Double Cask Rye Port Finish, a 2015 bottling limited to 250 bottles. In an intriguing take on a double cask-aged rye, this 90 proof whiskey is finished in port barrels imported from Portugal.

Nose: Dried currant and cherry, no doubt imparted by the port barrel finish, are immediately apparent. Warm allspice and nutmeg follow, as well as honey and a hint of smokiness. The nose is sweet overall.

Palate: In contrast with the sweet nose, this whiskey is quite hot on the palate, heavy with spicy cinnamon and rye. The dark fruit notes from the nose make a showing after a moment, against a mildly oaky backdrop.

Finish: Warm, with oak coming through more clearly, along with rye and berries. Some bitterness is present. Pure port remains after a long finish.

Overall, this is a satisfyingly complex, well-balanced whiskey, the berry notes from the port barrels smoothing out the heat of the rye, and I give it a score of 90.