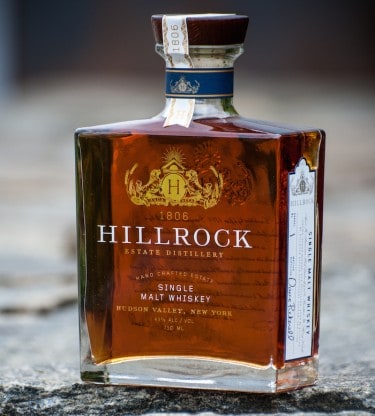 Last summer we first reported on New York-based Hillrock Estate Distillery releasing a peat-smoked American single malt. Their existing unsmoked single-malt was well-received, and the newer smoked version is in fact several different whiskies, all with varying levels of smoke.

Hillrock is notable for being one of the few field-to-glass distillers in the world, and production is overseen by former Maker’s Mark master distiller Dave Pickerell. Currently, they also make a solera-aged bourbon and a double-cask rye, the former of which we reviewed recently.

Each bottle of this American single malt comes with a barrel number, and each barrel has received a different amount of peat smoking, from less than eight hours up to 20. In general, earlier barrels are more lightly smoked. I sampled barrel 8, which, according to the distillery, is in the medium-smoke range—somewhere between 8 and 14 hours.

In the glass, it’s a deep, earthy russet, with tightly-packed, sluggish legs. Here are my tasting notes:

Nose: a faint citrusy note is the first thing I noticed, against a backdrop of smoke. I also picked up a touch of warm spice. After a few moments in the glass, though, an almost overwhelming white pepper aroma showed up, and it was difficult for me to notice anything else.

Palate: lightly spicy, with smoke, leather, and more of that white pepper.

Finish: long, smooth, and warm, with oak and, you guessed it, more white pepper.

I don’t know if my impression of this whiskey is mostly due to my inexperience with peat-smoked whiskeys—I’ve long been an avowed bourbon devotee and had never tasted an American single malt before this one—but I couldn’t get away from that pervasive pepper aroma. Worsening matters, white pepper has always had a strong barnyard funk to me, to the point where it takes me back to my formative years as an equestrian. This whiskey is smooth and decent on the palate, with a pleasant finish, but aroma-wise I’m turned off by it.

With the possible grain of salt me being a non-single malt drinker requires, I give it a score of 79 out of 100. You can hunt down a bottle of it for sale online from a range of liquor retailers here if you want.