The marketing of American whiskey, more often than not, aims to evoke notions of history and heritage, focusing obsessively on tying brands to whiskey legacies and century-old traditions. Every would-be craft bourbon distiller can track down a great-great grandpappy who used to work at Old Forester or make ‘shine in the woods of Appalachia. Greenbar, a small distillery in Los Angeles, is a breath of fresh air in that respect.

First and foremost, Greenbar is an eco-friendly operation. They turn out a range of spirits, including gin, vodka, and whiskey, all 100% organic, and they partner with a program that plants a tree in Central America for every bottle sold. But in terms of distilling, their approach is decidedly top-down; rather than pretending to be heirs to an ancient distilling legacy, they craft modern spirits that belong in cocktails, often specific drinks. Their rum, for instance, is made with daiquiris in mind. 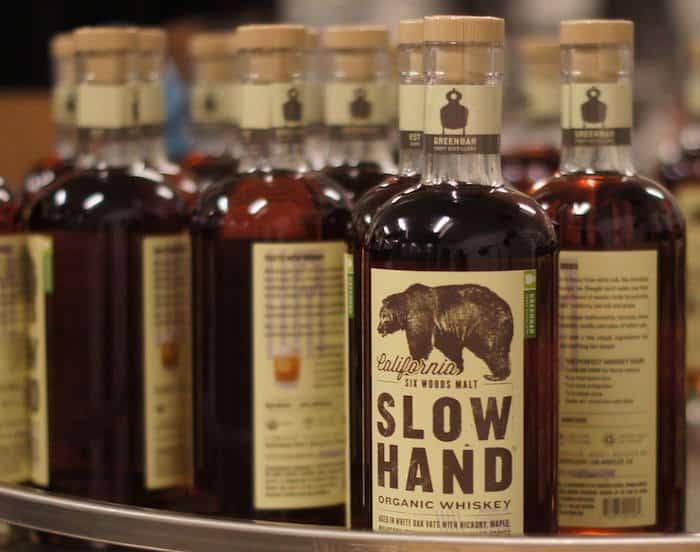 Greenbar produces two whiskeys: an unaged version, and the older Greenbar Slow Hand Six Woods, a 100% barley malt whiskey that’s bottled at 84 proof. The latter gets its name from the distillery’s whiskey aging process, which is rather unique in scope. Here’s what the distillery had to say of it:

Since whiskey gets most of its flavor from wood, the company decided to broaden its whiskey’s flavor by using six different species of tree to age Slow Hand. French white oak serves as the wood for the 1,000 and 2,000 gallon vats the whiskey sits in, while five other woods give it additional depth and complexity.

To bring these new flavors into whiskey making, [Melkon] Khosrovian and his co-founder and wife Litty Mathew tested more than 30 wood species before settling on five whose flavors worked best with the familiar vanilla and spice of white oak. Hickory adds notes of plum while maple, mulberry, red oak and grape bring in hints of butterscotch, currants, clove and perfumed black tea, respectively. Greenbar buys its barrels from France and seasons and toasts large staves of the additional woods in house.

Nose: Spice predominates initially, both sweeter baking spices like cinnamon and ginger and hot, savory black pepper. Some dark fruit is also noticeable. After a few minutes in the glass, I noticed a chewy umami undertone, almost like soy sauce.

Palate: Fairly spice-forward, but not hot on the palate like a rye. The palate is somewhat sweeter than the nose, with butterscotch and brown sugar notes. On the finish, spice is followed by brown sugar, then fades to wood. It’s warm and pleasant, with the barest hint of pepperiness.

Greenbar’s cocktail-friendly approach is in evidence here, and this is an approachable, well-balanced whiskey. A nice range of flavors are present, but nothing hits you over the head. Although I’d be perfectly happy to sip it neat, this is obviously a whiskey that plays well with others. Loads of creative recipes can be found on Greenbar’s website, but I’d stick to basics: to me, this whiskey seems tailor-made for a Manhattan.