Editor’s Note: A more current version of this whiskey is reviewed by us here. 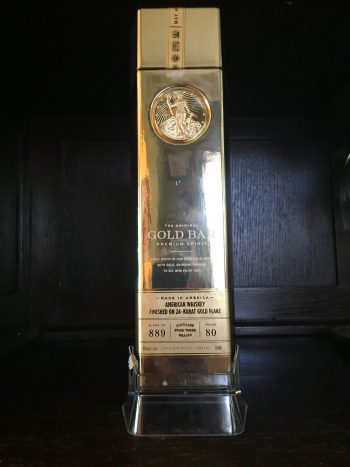 This release, Gold Bar Gold Whiskey, from the aptly named Gold Bar Bottle Co., is without a doubt the boldest fashion statement that has ever graced the shelves of my liquor cabinet. In your hand, it feels just like a gigantic remote control; on its stand, it looks like a gilded Washington monument, or the obelisk from 2001: A Space Odyssey, had it been designed by Donald Trump

There’s a little information available about the whiskey inside. It’s a sourced product obtained from “the finest Midwestern distilleries.” A little digging unearths that it’s made from a blend of Indiana and Kentucky spirit, with a mash bill of 88% corn, 9% rye, and 2% barley. The spirit is then “finished on 24-karat gold flake,” a process that makes for great marketing copy but whose efficacy as a flavor-enhancer I question as gold is totally chemically inert. And then, it’s decanted into this remarkable bottle.

Liquor has a long history of novelty bottlings. Tequila in bottles shaped like skulls, bulls, and guns is just a quick liquor store trip away. Shockingly ornate Bella Figura bottlings are practically obligatory for upscale Italian grappa producers. And why drop the better part of a year’s salary on a bottle of Macallan if it’s not packaged in a custom wax-cast crystal Lalique decanter? Honestly, I’m surprised it’s taken this long for the gold bar to make an appearance.

It seems glitteringly obvious to me that the compelling reason to purchase Gold Bar Gold Finished Whiskey is its bottle, not its contents. Yet style can’t exist without some kind of substance, and after we wrote about this release in April I couldn’t wait to crack open that big, clunky bottle to see just what was inside. Would it contain little flakes of gold a la Goldschlager? (Sadly, no.) Would its flavor match its bold appearance, or would it be nothing but a charlatan, vapidity wrapped in a shiny package? Let’s find out.

Appearance: Well, the bottle is shaped just like a gigantic gold bar. It’s so shiny you can see your own reflection in its surface, which means your hands better be clean when you pick this thing up or it’s smudge city. Embedded in the front is a minted, artist-designed bronze collector coin depicting the “Lady of Fortune,” as well as a cap strip that reads “May her light reveal your fortunes [sic] path.”

The bottle has a slanted bottom (potentially alarming after you’ve had a couple drinks), so it comes with a surprisingly chintzy clear plastic stand that looks like it could double as a business card holder. Overall, the appearance is gaudy, eye-catching, simultaneously cheap and expensive, and weirdly irresistible.

Nose: Mild – really mild. There’s a bit of green melon, some sugar syrup, and a kind of carbonated quality, almost like ozone. It’s extremely light, almost to the point of smelling like vodka.

Palate: Also quite light. Some nice round sweetness in the entry, with notes of powdered sugar, soft grain, honeydew, and the faintest suggestion of vanilla. The finish is short and abrupt, leaving nothing but a vaporous sweet flavor behind. Though it’s only 80 proof, it tastes quite a bit hotter, because there’s not much richness to balance the alcoholic burn. It reminds me of nothing so much as an imperfectly rectified craft vodka. I wonder, perhaps, if this contains some of that aged MGP light whiskey?

If you’re looking for a completely ridiculous centerpiece for your liquor cabinet or a grand prize-winning white elephant gift, look no further than Gold Bar Gold Finished Whiskey. If you’re hoping for contents as bold as the bottle, you’ll be disappointed. This stuff won a double gold at the San Francisco Spirits Competition (and no, not just for packaging), which leaves me scratching my head. There are no off flavors, but there are no on flavors either. This whiskey, like the bottle it arrives in, is unable to stand on its own.

A side note: One of the most interesting things about this product is how clearly the bottle was designed for fungibility. The only place “whiskey” is seen anywhere on the bottle is on adhesive stickers; everywhere else, the bottle only reads “finest spirit.” It begs the question: Can subsequent releases of gold bar vodka, gold bar rum, and gold bar tequila be far behind?