Seattle might be synonymous with the tech industry today, but the city’s blue collar past isn’t quite dead yet. Fremont Mischief, a craft distillery in Seattle’s Fremont neighborhood, has just released two expressions with a connection to one of Seattle’s most important historic industries: fishing.

We wrote about the project earlier this month. In brief, Fremont Mischief made two identical batches of rye whiskey from a mash bill of 80% rye/20% barley, all sourced from within 200 miles of the distillery.

The barreled whiskey was then placed on two different Deadliest Catch vessels to age: half went to Captain Sig of the F/V Northwestern, and the other half to Captains Casey and Josh of the F/V Cornelia Marie. Both lots spent two seasons riding the high seas before they were dumped, blended with an almost seven-year-old whiskey from Fremont Mischief, and then bottled individually to showcase the effects of their unique aging situations (and enable some good-natured competition).

“Captain Sig fished the West Bering Sea, close to Russia where the stormy seas often have waves of 50 feet. The Cornelia Marie fished near the Bering Sea near the icepack at the Arctic circle where the wave action is much calmer and the temperatures frigid.”

It’s not the first maritime aging stunt this year, but it is definitely the most charitable: proceeds will be donated to the Sea Scouts, a nonprofit that trains the next generation of mariners; and the Seattle Fisherman’s Memorial, which supports injured commercial fishermen and the families of fishermen lost at sea. The goal is to raise $40,000 for the two organizations.

This fishermen-turned-whiskeymakers shtick is a gimmick I’ll bite on (pun intended). I grew up in commercial fishing territory – first Southeast Alaska, then an island in Puget Sound – where I got a glimpse of how hard fishing really is, as well as a healthy appreciation for northern Pacific seafood. Helping fishermen while drinking whiskey? Sign me up. 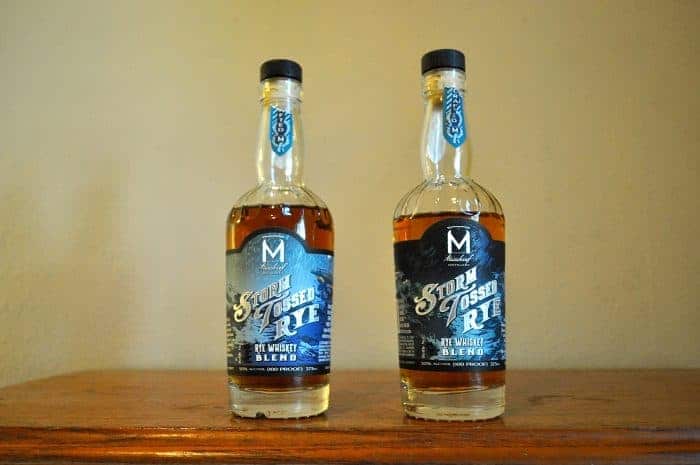 Nose: Very soft and light, the aroma suggests warm honey with a hint of pickle brine.

Palate: Light and gently sweet, there’s lots of grain character here. It reminds me of a soft ginger cookie, the big ones covered in demerara sugar that you get at a coffee shop, but a slightly bitter backbone of scorched breadcrust keeps this whiskey from straying into pastry shop territory. Clearly young, it’s on the spirituous side, with a short, warming finish.

Nose: Wow this is strange! If I didn’t know for sure what was in the glass, I’d have guessed it was an old tom gin. The nose is very botanical, with notes of fresh dill, juniper, and sage as well as that same hint of molasses cookie.

Palate: Also very botanical, with notes of juniper, sagebrush, orange peel, black pepper, ginger, and an odd hint of celery or angelica adding up to a very gin-like palate. The wood character is moderate, relatively speaking, but there are some resinous, oily elements that might come off as a bit harsh to some tasters. This would make a very interesting Manhattan cocktail (although I expect it might taste something like a Martinez).

These whiskeys are so different! They’re clearly united by their herbaceous, botanical, almost gin-like qualities, as well as a relatively light barrel character (perhaps a result of cooler-than-typical aging conditions), but there’s no confusing the two. Where the Cornelia Marie release is light and sweet, the Northwestern is more herbaceous, woodier, and quite a bit stranger.

Both are surprisingly smooth for 100 proof, with no off-flavors or major defects. If pressed, I think I prefer the Cornelia Marie version, which tastes sort of the way I expect a NAS rye to taste, but I appreciate how weirdly bold the Northwestern release is. And now that I think about it, that strange, gin-like resinous quality might make it a perfect match for a nice piece of hot-smoked sockeye…

Shares
436
Views
Share on FacebookShare on TwitterGet Our Newsletter
Get Jefferson's Ocean at ReserveBar. Shop now!