Of all the bottom-shelf whiskey, Ezra Brooks shines the brightest in my book. I’ve purchased many a bottle of Ezra Brooks bourbon, produced by Luxco and distilled at the Heaven Hill distillery, for parties and my own leisurely drinking, so I was keen to taste their version of rye whiskey, a new venture for the company. The release was coupled with a new cork and an updated label – a matte finish that feels grainy and expensive. I spent a good minute admiring the texture.

Many distilleries are trying out rye whiskies, and it’s hard to keep track. In my opinion, Ezra Brooks Straight Rye seemed a little bit like they were just jumping on the bandwagon. And I only felt that way because in a press release, a spokesperson from Ezra Brooks touted a 27% increase in sales of rye products in 2016 as the reason they decided to release the product. That’s common sense – any good business is going to follow trends in the market.

In that sense, I think they did what they set out to do, which was create a rye product that tasted good enough to appeal to the masses at an accessible price. They, like so many others, opted to source their rye spirit from Indiana, almost certainly from MGP. 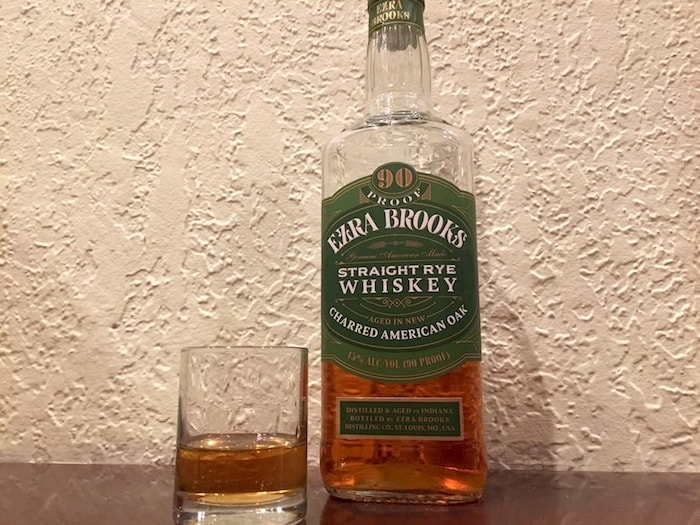 Vital Stats: Clocks in at 90 proof with 45% abv. Aged 24 months and charcoal filtered. The whiskey is distilled and aged in Indiana, then bottled in St. Louis, and priced around $18 – $21 per bottle.

Appearance: The spirit has a very light color that looks more like an IPA than a whiskey. It’s not very thick, but the legs are long and spindly.

Nose: Whoa, baby! This stuff smells really strong. The caramel notes stood out, with some light citrus and vanilla.

Palate: When it hit my lips, I could feel the spiciness of the rye, but it didn’t hit my tongue right away. Warm caramel and vanilla stand out in the beginning. It’s got a quick finish that holds the rye flavors hostage until the sweetness fades.

Ezra Brooks is a pretty inexpensive, easy-drinking whiskey that I might buy when I’m looking for a good mixer. Their straight rye fits the bill, but it also tastes great neat or on the rocks, and I really enjoyed it as a hot toddy, which is my favorite whiskey cocktail.

In December, I had the pleasure of trying Woodinville Whiskey Co.’s One Hundred Percent Rye, which was much spicier and had a very prominent oak flavor. Compared to that, I thought Ezra Brooks’ Straight Rye was a lot more mellow, with a milder wood flavor and a sweetness that sets it apart from other ryes I’ve tasted.

77
Shares
3.8k
Views
Share on FacebookShare on TwitterGet Our Newsletter
Get The Macallan® Rare Cask at ReserveBar. Shop now!