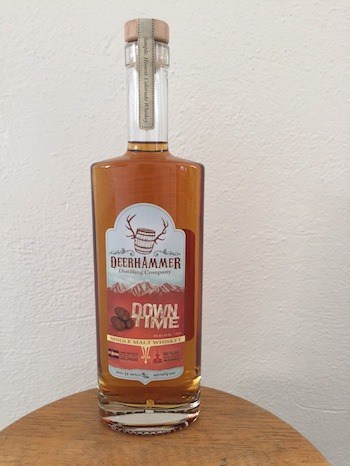 Editor’s Note: This whiskey is an older, now out of play version of this distillery’s Deerhammer American Single Malt. We’ve requested a review bottle from the distillery and will post a review of the more updated release once it is completed.

Thriving in experimentation, Deerhammer’s flagship spirit is a smoky, distinctly American-style single malt. It’s made from a 100% malted barley mash fermented in open-air tanks. After the mash is double-distilled on a traditional direct-fire copper pot still, it’s aged for 18 months in lightly charred new white oak barrels. the finished whiskey, though unique, could just rival its roots across the pond.

The Ecksteins are certainly making some interesting spirits in the high altitude climate “at the base of Colorado’s tallest mountains,” where temperatures can vary as much as 40-80° daily. All that temperature variation means more interaction between the spirit and the wood of the barrels, leading to faster aging times and more intense oak character.

Vital Stats: This 92-proof whiskey is barreled at 110 proof, double-distilled and aged in charred white oak barrels for 1.5 years. Retails for $45-55 per 750 ml bottle.

Appearance: It pours a rich, toasted caramel color with an orangey hue, even verging on red-tinged. Thin, but good legs on the side of the glass.

Although it’s not for the smoke-averse, I very much enjoyed this American single malt whiskey. It is so sharply smoky – campfire smoke, not earthy peat – that it could turn some people off. However, I’m a sucker for that full, yeasty flavor underlying the smoke and taking the edge off. It’s a textural pleasure, viscous and a good balance. The little hint of orange rind also kept me sipping.

Finally, it was delicious with food. Paired with some spicy sausages and balsamic fried broccoli, the smoke dissipated, leaving a really nice complement to my meal. The smoke did not overpower, but integrated seamlessly. A whiskey to be both sipped and paired is definitely worth a try!