Editor’s Note: This whiskey was provided to us as a free sample to review. The Whiskey Wash, while appreciative of this, did keep full independent editorial control over this article.

The single malt release is the culmination of a project that’s spanned more than a decade for founder and head distiller Lee Medoff. Beginning his career in the beverage industry as a brewer at local hotel and bar chain McMenamins, Lee went on to co-found House Spirits in 2004, where he helped create Aviation Gin. 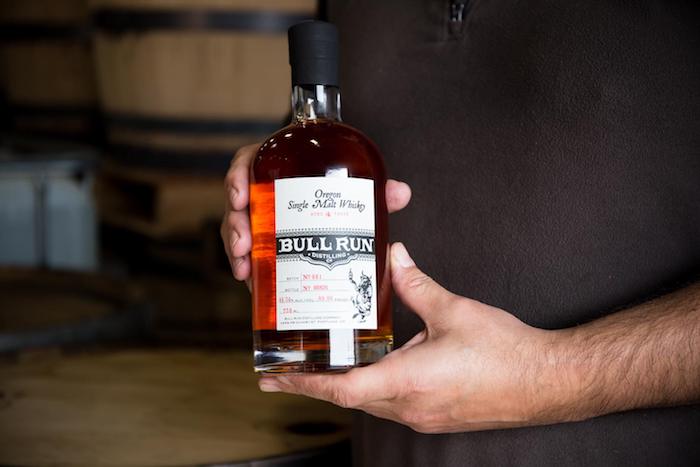 While at House, Lee decided to experiment with aging single malt in new charred oak casks, a major departure from traditional Scotch aging techniques. It’s the same tactic now used at House Spirits to make Westward Whiskey, and it produces a sweeter style of single malt than used cooperage.

“Using the new barrel ties us to American traditions, to indigenous whiskey culture,” said Lee during our recent visit to his distillery for an advance preview of his new whiskey. “I love Scotch, but I think there’s a preciousness to it. I wanted to make something complex, something you could drink on its own but was also usable in cocktails. And a lack of sweetness makes it hard to use a spirit in cocktails.”

The wash for Bull Run Single Malt is produced at nearby Burnside Brewing, where the brewers ferment near 80 degrees, which Lee says produces big, fruity esters. In his experience, that fruity character goes away in the barrel at first, only to return years later in the form of a sweet, almost brandy-like character. “That’s what I like,” said Lee, “and we’ve been waiting for it to come back.”

The finish is rich and a little bit herbaceous, with a bit of mint and a distinctive note of unsmoked marijuana at the very end.

Until this release, Bull Run has been known primarily for its Temperance Trader whiskey line, a series of sourced whiskeys including a bourbon in regular and barrel-strength versions, an American whiskey, and a Chinato barrel-finished bourbon.

Now that Bull Run is selling some of its own juice, these “Merchant Bottling” releases, as they call them, aren’t going away, but they are losing the “Temperance Trader” name in favor of selling everything under the Bull Run label. There’s also a limited-edition cask-strength single malt release as a companion to the standard expression. Lee says to keep an eye out for future additions to Bull Run’s growing whiskey lineup, including some experimental wine barrel-finished whiskeys using pinot noir casks from local winemakers Brooks and Penner Ash.

Lee, as part of our visit, provided us a sample of the new single malt for review, which we present to you below. 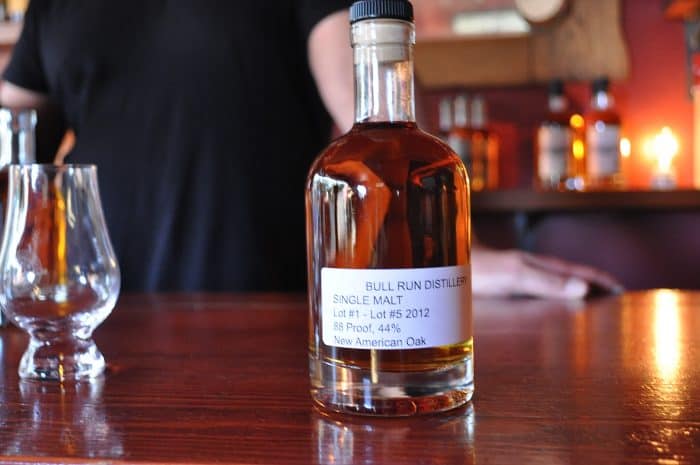 Nose: Rich, toasty, and a little funky. I get cocoa, earl grey tea, graham cracker, peanuts, buttered popcorn, and flat root beer. There’s some light char as well as bright notes of green grapes and apple. With a little water, a surprising touch of pineapple emerges.

Palate: A sweet entry evokes notes of dark caramel, cola, and shortbread cookies, as well as a light note of smoke. In the mid-palace, a nice raisinated quality reminds me of a slightly savory fortified wine, like oloroso sherry. The finish is rich and a little bit herbaceous, with a bit of mint and a distinctive note of unsmoked marijuana at the very end.

This is a nice whiskey, and I can certainly see how it would be enjoyable in a cocktail or straight. It’s pretty and light without being forgettable, flavorful without being dense, and an interesting twist on the classic single malt expression. It’s also affordably priced; House Spirit’s Westward Whiskey, a close analogue in terms of style and region, sells for about twice as much.