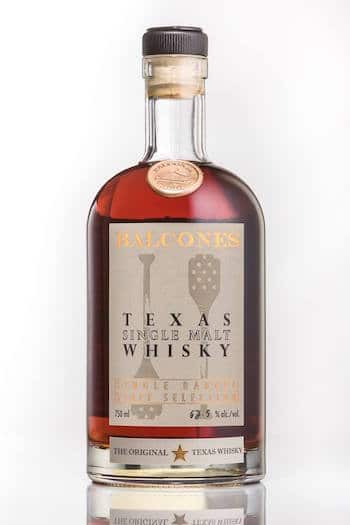 Balcones Distilling in Waco, Texas, exists in what used to be a welding studio under a bridge. The founders not only transformed this space into a distillery, they also hand-made all of the distilling equipment, right down to the custom stills.

Although the Balcones team is moving house this year, surely that hands-on approach will hold steady to the new location. New to their move, however, will be a collaboration with several local construction and engineering businesses in addition to the venerable Forsyths of Scotland (producers of stills used at Bruichladdich, Yamazaki, Woodford Reserve, and Glenfiddich, to name a few). Considering the current quality of Balcones’ spirits, I can only dream about the production value such high-quality stills will add to the Balcones portfolio.

Selected annually as a celebration of the distillery staff, Balcones Single Barrel Staff Collection (Cask 3549) was the 2014 release of this tradition. The release is now sold out online. Fortunately, when Balcones’ new distillery opens this year, they will have more production capacity – and,  in turn, wider distribution – so keep an eye out for more Balcones in more states in the future.

Bottled at cask strength, this Staff Collection release is a whopping 62.5% ABV. However, unlike other high-proof spirits, Balcones did not make me instantly regret coming near it. As a single malt, Balcones is made with 100% malted barley (they use Simpson’s Golden Promise barley).

Unlike most single malts, the single barrel selection was aged in a “yard-aged” Hungarian oak barrel. According to emails between myself and current Head Distiller Jared Himstedt, “yard aging refers to the time tie staves spend curing before being made into barrels. 6-9 months is pretty common for regular bourbon barrels. Ours are 36 months. During that time the staves are getting rained on, freezing, etc. All of the weathering mellows the wood and takes out the fresh cut, greener wood notes and the structure is somewhat compromised, making future toasting more penetrating.” This customizable process gives Balcones’ access to a totally unique flavor spectrum.

Balcones uses a wide array of American, French, and European barrels in its single malt expressions. Some of those European barrels are made from Hungarian oak, which is known in the wine world as lending a definitive “bacon-y” or “nutty” quality to wine. While it’s not widely used in the whiskey world, Hungarian oak behaves similarly to French oak due to an analogous molecular structure, but is less expensive to source. Himstedt describes European barrels as being “quite big and rich, with a decent amount of spice, but with less tannin and more fruit than our French barrels.”

The combination of “yard-aging,” unique barrel choice, and cask strength bottling has produced a single barrel that was selected “almost unanimously” by the staff it honored, and is one I would gladly drink from again.

Appearance: Balcones Single Barrel Staff Selection (Cask 3549) has a dark caramel hue in the glass. As a cask-strength whisky, but one lacking an age statement and aged in a different kind of oak than whisky drinkers may be used to seeing, jumping to conclusions about taste based on dram color may not be wise in this instance.

Nose: Balcones’ first impression on the nose is a big burst of ethanol, likely due to the high proof of the spirit. Underneath this punch in the nose hides an undeniable richness. After a long, hard swirl, out comes a bevy of new scents: rubber tires, Werther’s candies, banana bread, and a fatty, buttery, caramel-y note.

Palate: Like the nose, the first impression on the palate is somewhat jarring; Balcones has a huge bite to it. Accompanying a stinging mouth feel are flavors of barnyard, hay, milk chocolate-covered cherries, char, leather, and very salty steak. Tough, flavor-packed, and prickly, adding water seemed like the next logical step in unlocking further flavors.

After adding a few drops of water, many of Balcones’ rough edges smooth out, making an equally interesting but more drinkable dram. The nose goes from rich, toffee ethanol punch to a softer mix of butter and honey. Cinnamon Toast Crunch, banana bread again, and sea salt round out the nose. A hint of sharpness, however, remains on the nose even after dilution.

The palate keeps its richness, but is transformed from carnal to woodsy. Rich and cinnamon-sugary, the mouth feel becomes creamy and buttery, accompanied by grassy green apple notes.

Finish: Even after diluting, the finish is still hot and prickly, but it’s entirely possible this can be attributed to a lack of resting time I gave myself between first and second takes on tasting. But then again, this intensity is one of the pleasures of barrel-proof whisky tasting!

Balcones Single Barrel Staff Selection (Cask 3549) was a journey to taste, and one I would gladly go on again. It isn’t often that I experience a whisky both so dynamic in flavor and so fun to research. I would recommend this bottling to anyone lucky enough to stumble upon it, or driven enough to hunt it down. Balcones proves a memorable and genuine cask-strength American single malt fit for the most adventurous of spirits.