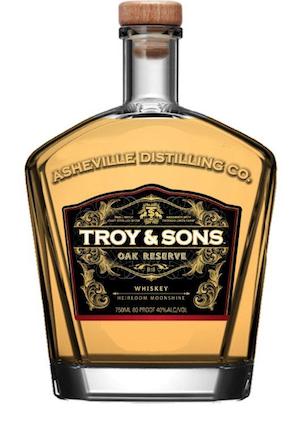 It’s hard to not have a bit of a soft spot for craft distillers – or any small business for that matter – who work from the heart. (And I wrote that sentence before discovering that the founder of Asheville Distilling Co. just published a memoir, entitled Pure Heart: A Spirited Tale of Grace, Grit, and Whiskey.) Even better is when this passion translates into in the production of quality spirits.

Asheville Distilling Co. owner/founder Troy Ball’s interest in distilling was inspired by her introduction as an adult to authentic, at-home North Carolina moonshine marked by smoothness and complexity. She felt inspired to develop her own as a means of introducing a broader audience to the real potential of moonshine, elevating it from the harshness it’s often associated with.

Troy has often credited the quality of her distillery’s spirits to the grain. For Troy & Sons Oak Reserve, an heirloom variety of white corn is used, called Crooked Creek Corn from Peaceful Valley Farm, a family-owned and -run farm dating back to the 1800s. While it isn’t difficult to discern differences on the palate across whiskies dominant in one grain or another, I found it interesting to learn that this white corn is particularly high in fat but low in sugar. Unsurprisingly, particular varieties within one grain family – and to a further extent, specific parts of the grain – can produce a broad spectrum of results when distilled, and Asheville Distilling Co. seems focused on that intricacy.

As I prepared to try Asheville Distilling Co.’s Troy & Sons Oak Reserve and learned more about the trio of spirits they produce (also including Platinum moonshine and Blonde Whiskey), the volume of strong reviews received around its Platinum moonshine piqued my curiosity for the Oak Reserve, which is billed as an aged version of the Platinum.

It’s also worth noting that, per U.S. TTB (Alcohol and Tobacco Tax and Trade Bureau) Class and Type definitions, Troy & Sons Oak Reserve is classified not as a “corn whiskey,” even though it is made from 100% corn mash and aged in used cooperage, but simply as “whiskey.” It is technically “whiskey made from corn” (100% corn mash), not corn whiskey.  The reason, according to Asheville Distilling Co, is they “use a column still that runs at proof significantly above the 160 proof threshold for labeling as Corn Whiskey.”

Appearance: This has a golden blonde hue, consistent from bottle to pour.

Nose: A subtle yet bright herbaciousness pops through first, complemented with a light spiciness. Adding a rock or two brought out an undertone of brown rice syrup sweetness in the nose.

Palate: This is a very pleasing, gentle whiskey. I was initially more aware of the warming tones than intense flavor, with a moderate heat that hits the back of the throat and has a lingering toastiness. There are flavors of charred corn – think grilled corn on the cob – complemented by notes of allspice, toasted almond, and vanilla.

Troy & Son’s Oak Reserve is an interesting, unique whiskey. It’s smooth and gentle yet more dynamic than its simplicity may initially suggest – all-around pleasant and an easy sipper. Comparatively, Hudson’s Baby Bourbon is also 100% corn-based, albeit a bourbon so it is expectedly fuller and deeper than the Oak Reserve. However, being that the barrels the Oak Reserve are aged in were previously filled with bourbon, there are some similarities in the sweeter notes between the two. I also noticed some similarities in brightness between the Oak Reserve and Balcones Distillery Baby Blue Corn Whiskey (another 100% corn whiskey, albeit made from a very different variety of corn), though the latter is a bit richer.

Troy & Sons Oak Reserve made me think of sitting on a porch in the late afternoon springtime sun, by a freshly clipped lawn. It is an easy straight sipper, and would lend itself well to a refreshing cocktail in which whiskey wouldn’t need to dominate the flavor profile.