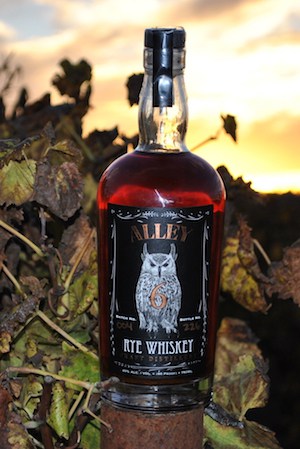 Several years ago, I was training to run the Boston Marathon when my hamstring decided to snap like a too-taut piano wire. As consolation—and since I’d already put in for vacation time—I rearranged my travel to California’s Sonoma Valley, an area I’d wanted to see only slightly less than Boston’s finish line.

I tasted wine exclusively, because why not? That was what the area was known for, right?

Healdburg’s Alley 6 Craft Distillery is aiming to change that.

Alley 6 is an artisanal distillery, founded in 2012. Its first whiskey, the Alley 6 Rye, hit shelves in September 2015 We wrote about it shortly thereafter. Alley 6 has also developed a single malt as well as bitters made from candy cap mushrooms; both are only available in their tasting room. No MGP or mysterious marketing origins: everything about Alley 6’s products—at least currently—is done in their distillery. From milling to distilling to barreling and bottling, it’s all done in one place.

The Alley 6 Rye is a mild 86 proof, and made from a mash bill of 78 percent rye and 22 percent malted barley. It’s aged in new, heavy charred American white oak.

Nose: So interesting! Ryes often have a spicy, peppery nose to me, and this doesn’t. It’s more like a visit to a tropical island: Hints of sugar, vanilla, roasted fruit, almost chewy. Like pineapple upside down cake.

Palate: Ah, here is where that rye spice comes in. It’s so island-ey on the nose, but less so on the palate. It brings more of a traditional rye fiery kick, but mellows a little on subsequent sips. There is a little banana on the finish, though think less peel and more bananas foster. Alley 6 is like the roasted cooked fruit of rye.

I like that this is a mellow rye, yet with a fascinating nose/palate juxtaposition. For $55, it’s a good deal, considering. Don’t put this in a cocktail. Drink it neat. Sip slowly to let its complexity pique your interest. I could see drinking this watching the back and forth of thunderstorms rolling in. Like a thunderstorm, you don’t entirely know what you’re going to get—and that’s cool.

I’m excited to see what Alley 6 comes up with next, based on this rye. It’ll be an interesting ride.