The High West Distillery has long been one of the more interesting whiskey brands on the American landscape. It was founded in 2006 as an unabashed blender. It didn’t use sourced juice and try to hide that fact; it promoted the idea that it was buying good whiskey from others and blending and finishing it in distinctive ways.

High West’s first release, in 2007, was its Rendezvous Rye – still one of its signature annual bottlings. It opened its own distillery in 2014 and was acquired by Constellation Brands in 2016, but pledged to continue blending sourced whiskies as much as making its own. It continues to live up to that pledge today.

I happened to be in Utah in the fall of 2017, and stopped by High West’s Park City Saloon for a tasting flight. The saloon likes to call itself “the only ski-in gastro-distillery in the world,” but we neither skied in nor ate anything. We did, however, relish the majesty of the place and enjoyed some whiskey.

There was no A Midwinter Night’s Dram available in the saloon at the time – or I don’t remember it in the flight we tasted, in any case – but they did have Double Rye! and Rendezvous Rye. My brother and I had an enjoyable visit, and we enjoyed the the flight.

Fast forward a few years, and I finally get to try to A Midwinter Night’s Dram, a limited release of Rendezvous Rye that has been finished for an extra year or two in Ruby and Tawny port barrels. It’s High West’s most sought-after annual release, and I’ve been looking forward to finding out whether it justifies all the attention – and to see what I missed out on in 2017. 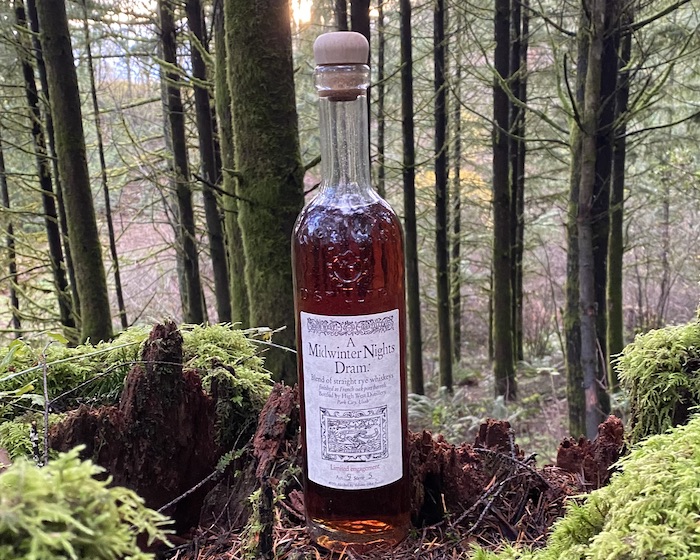 Appearance: Deep bronze color, with legs that stick to the side of the glass.

Nose: Sawdust, wet wood, cherries, and caramel sweetness. There is rye spiciness, but not the earthy scents you sometimes find with rye whiskey.

Palate: The rye spice is more front and center in the mouth than it was in the nose, though it’s friendly and gentle. I also taste cinnamon, vanilla bean ice cream, figs, leather, and toasted oak. It provides a medium-long finish with a peppermint candy finish that runs along the sides of the tongue.