Westland Marks A Decade With Launch Of “The Judgement Of Westland”

Inspired by the wine world’s famed Judgement of Paris, a blind tasting hosted in 1976 by a British wine merchant that pitted New World wineries of California against the vaunted Bordeaux Chateaux, the Judgement of Westland series of blind tastings looks to determine whether a single malt from America can stand with the finest single malts of the Old World.

“The Judgement of Westland isn’t about claiming that we’re better than someone else. It isn’t about crowning a champion,” said Matt Hofmann, co-founder of Westland, in a prepared statement. “It’s our effort at Westland to measure ourselves against other whiskeys and other regions that we admire and that are respected the world over. We believe that all single malts should be considered and judged on their merits, on the intention and excellence of execution. We celebrate that the map of great single malts is now a global one, and we are excited for fans to assess our place within it.” 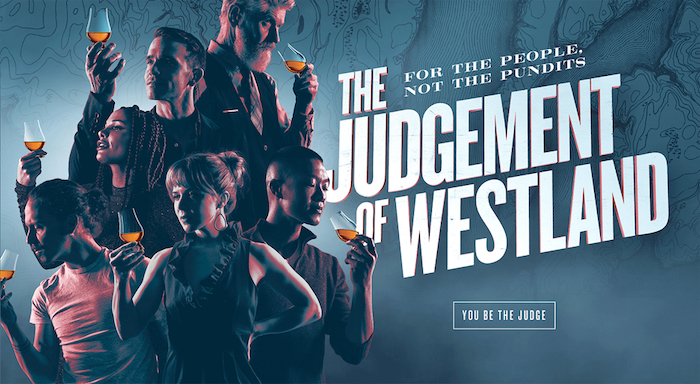 The Judgement of Westland (image via Westland)

Kicking off with the first tasting at the Whisky Show, the blind tastings held worldwide will feature four unique single malts from four distinct regions … Scotland, Australia, India, and the U.S. The whiskeys themselves will not be revealed to attendees, only their country of origins. The single malts and scoring system have been curated and designed independently by whiskey luminaries Dave Broom and Sam Simmons.

The selection of exclusively single malts share the criteria that all are widely commercially available, are listed at similar price points, and none are cask strength or single cask bottlings. Broom and Simmons have specifically designed the scoring system so that the whiskeys are rated out of five stars and not to be ranked in order but rather graded individually on their own merits. If all four whiskeys receive the same grade, that’s it.

According to Broom, there are now more distilleries around the world making single malt whiskey than at any time in the spirit’s history. “All single malts, no matter where they are from, should be seen and judged equally,” he said.

Blind tastings will be hosted from October thru December, beginning with the Whisky Show in London Oct. 1-3. For more information on the campaign or to follow along with results updated daily, check out www.thejudgementofwestland.com.