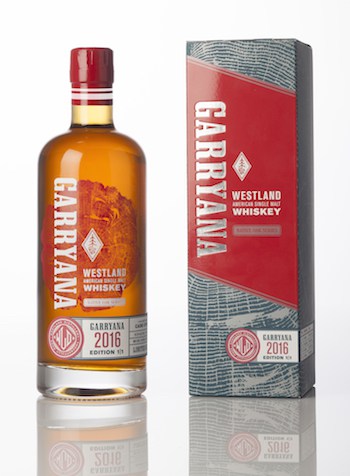 Quercus garryana, known more commonly as Oregon oak, is a native oak tree species of the Pacific Northwest. We’ve previously written about its use in barrels for aging whiskey. Only a handful of distilleries have made use of it thus far, including Oregon-based Rogue Spirits and Clear Creek to make its McCarthy’s single malt expression.

Meanwhile, well-known American single malt maker Westland out of Seattle, Washington, has toyed with it in some single cask releases, and now looks to be going deeper with the release of a dedicated bottling.

Westland Distillery Garryana Whiskey, according to the distillery, is the first in its new Native Oak Series. This just under three year old whiskey was aged in Oregon Oak barrels from reWine Barrels, a barrel maker out of Salem, Oregon. This cooperage was aware of a stock of already aged Garryana lumber that no one wanted. It thus became the property of Westland for the purposes of being made into whiskey barrels.

“This oak is extremely rare and it’s a unique opportunity we’ve been given to use it to make whiskey,” said Westland master distiller Matt Hofmann in a statement. “It’s a really fascinating species of oak and certainly one of the most charismatic I have ever worked with.”

Garry Oak is dark and assertive, yet mysterious. Instead of the typical notes of caramel, baking spices and coconut of Quercus alba [American white oak], we get complex molasses, heavy clove, smoke, coffee grounds and blackberry preserves.”

Plans call for 2,500 bottles of Westland Garryana to be released in this first edition later this month, pricing around $125 a bottle and bottled at a cask strength 112.4 proof. Future editions will be released in 2017 and beyond. More information on it can be learned via the video at the end of this story.

“Garry Oak offers us a great opportunity that not many distillers in this industry will ever get,” added Hofmann. “I’m really proud of this whiskey—not only because it is one of, if not the best whiskey we’ve ever made, but also because of what it represents.”

“For us, American Single Malt Whiskey must honor the traditions of the old world but contribute something new and worthwhile at the same time. Garryana does just that by truly reflecting the distinct qualities of the region we’re from; of the character of those who make it and of the place where it is made.”