There is a concept in the wine world known as terroir, that in a nutshell focuses upon the idea of how localized factors such as soil, water, climate and others impact the final quality of the product in bottle. It has been argued by some, as we wrote a few years back, that whiskey conceptually could have terroir factors at play as well depending upon how narrowly focused the release’s environmental characteristics might be. One distillery we are seeing this play out in is Washington-based Copperworks Distilling, which recently released a malt whiskey distilled from a single barley variety.

The new Copperworks Single Variety Malt Whiskey, according to those behind it, is the first in a series of American single malt whiskey releases that will focus upon whiskeys made from “a single variety of barley grown on a single local farm in one growing season.” The first offering from this line up heralds “from a barley variety named ‘Alba,’ grown on the Knutzen family farm, located 70 miles north of Copperworks in the Skagit Valley. The barley was malted at nearby Skagit Valley Malting.” 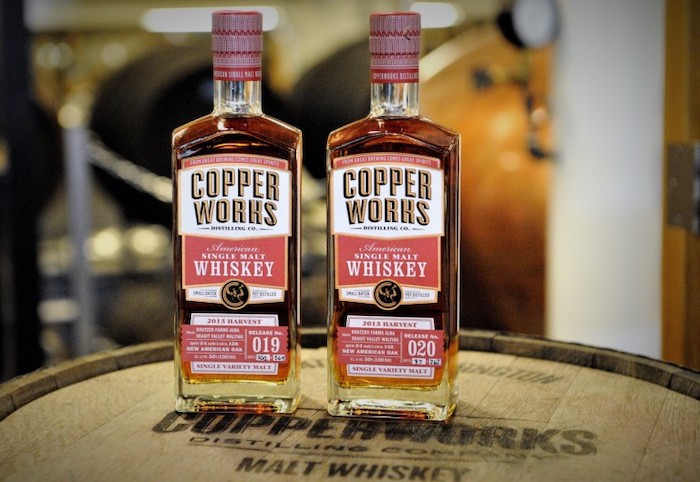 A beer made from the barley was distilled twice by Copperworks and then aged in their Seattle waterfront location for 34 months in full-size, charred, new American Oak barrels before being bottled at 50% ABV. A total of two casks have been initially released for this particular variant.

“When you make American Single Malt Whiskey, the only grain you use is malted barley,” said the distilling team at Copperworks in a prepared statement. “Like any agricultural product, barley is subject to variation in flavor due to its variety, growing location, and the weather conditions. The Pacific Northwest, where Copperworks is located, has several different climates (from wet and cool, to hot and dry) and soil types (from rich and deep, to sandy and shallow). All these areas are used to grow great barley for malting.

“So we’ve been exploring flavor possibilities by using barley grown in a variety of Northwest locations to produce our American Single Malt Whiskey.”

You’ll find some official limited tasting notes for this whiskey below. It should be noted as well the distillery is working with “five different varieties of malt grown on seven different local farms” for this project, so it will be interesting to see over time how the different types of barley compare against one another. It would also be fascinating to see Copperworks put some of this into an Oregon oak barrel to dial in the local terroir aspect even that much more.