Is there a defining set of guidelines on what makes an American single malt whiskey? I was just recently having an email conversation with someone around this, and the only thing I could really point to at this point are American TTB regulations, which state that malt whiskey must be made “from a fermented mash of not less than 51 percent malted barley.” Beyond that, there’s room for a wide range of interpretation, including what Virginia Distillery Company (VDC) is proposing as they get ready to open their new distilling facility. 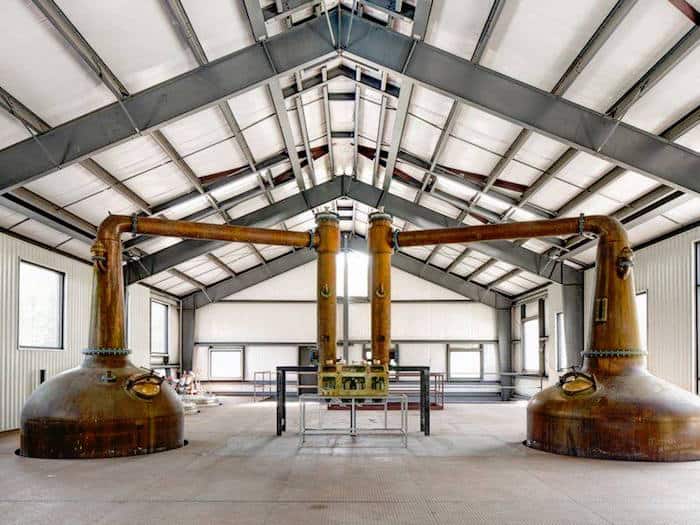 VDC is already known to some whiskey drinkers for their Virginia Highland Malt, an already-distilled Scottish single malt they import and finish in local Virginia port-style wine casks. The American single malt they are proposing goes way beyond this, according to the distillery, in that it:

starts with importing two-row malted barley directly from Scotland. Once they arrive, the grains will take on a new character in the unique microclimate of Central Virginia’s mountains. After the grains are split in an authentic roller mill first commissioned in the 1920s, the mash will be made with pure, sweet water from a nearby mountain spring. Like a traditional Scottish single malt, the whisky will be aged in previously used bourbon casks, but the hot summers and cool winters will create a unique maturation profile. During the two-to-four years the whisky needs to develop, the Blue Ridge climate will help pull different flavors from oak barrels as temperature and humidity vary day to day and season to season. The result will be an American single-malt whisky that is distinctly original.

This as-yet unnamed whiskey is said to be the culmination of a vision by the distillery’s late founder George G. Moore, who passed away unexpectedly in 2013. The facility that will help carry forth his idea is set to have its grand opening in mid-November. Situated on a scenic 100 acre property in rural Virginia, it will ultimately house a visitor’s center, museum and production facility that will be able to produce 350,000 cases of whiskey annually when at full capacity.

“At Virginia Distillery Co., we’re carrying my father’s vision to fruition,” said Gareth H. Moore, the distillery’s CEO and son of the late founder, in a statement. “We’re distilling a single-malt whisky utilizing time-tested traditional methods from the old world, but here in the new world Dad called home.”