For most people, the only time that Internet decision making and whiskey meet is around 2 a.m. with ill-fated online purchases or messages. But for the late George Moore, who worked in IT and data analysis from the nascent stages of the internet, malt whisky was a passion that drove him to found the Virginia Distillery Company in 2011.

His family keeps his spirit alive through the spirits they produce, age, and sell. Inspired by Moore’s 365-bottle collection and love of his adopted home, the distillery produces what they call Virginia Highland Whisky: whisky made in the Scottish highlands style that’s augmented with flavor from local beer, cider, and wine barrel finishing.

At the distillery, the soft-spoken and bearded distillery director Ian Thomas bubbles with the chance to talk about the process of making the whisky. Trained as a microbiologist specializing in yeast, Thomas joined the team early on first as a consultant, then as head of distillation. 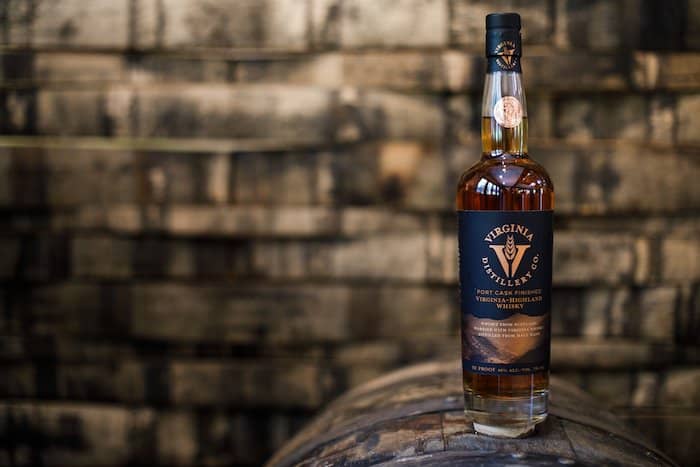 Though American single malt whiskey is now experiencing a boom, it’s still a category that consumers are much less familiar with than bourbon or single malt Scotch or Irish whiskies, especially in areas outside of major drinking markets like New York or San Francisco. The choice to focus on perfecting this style with a local flair has come with its fair share of challenges for the eight-year-old distillery.

As one of the founding members of the American Single Malt Commission, Virginia Distillery Company has continued to position itself close to the head of the movement to educate consumers. Onsite, this trend has inspired a robust education program including an on-site museum housed below the visitor’s center. Though most of the equipment housed there is no longer in use, it provides a glimpse into the area’s history of legal – and extralegal – distilling as well as the craft’s ties to Ireland and Scotland.

They’ve also taken pains to consult with giants of the industry. At the distillery’s inception, they hired Dr. Jim Swan, a Scotch industry veteran and expert consultant. During Virginia Distillery Company’s development and early days of production in 2015, Swan worked closely with Thomas to develop distillery protocols and to develop their product. 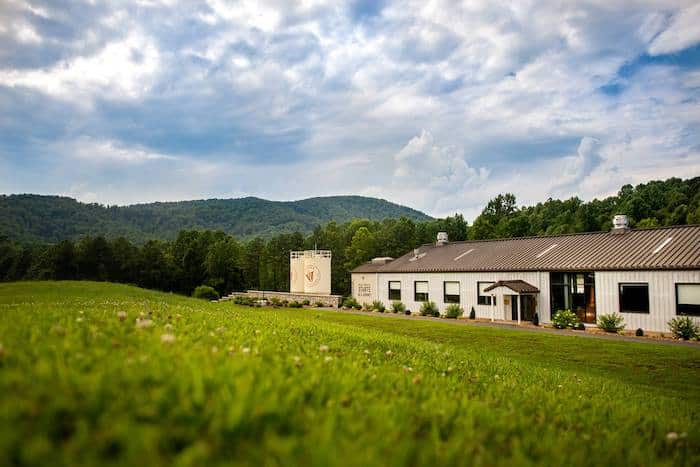 According to Thomas, they also try to stem the tide just by keeping focused on what they’re doing and the quality of their products. “We’re putting it out there, educating consumers and the general public on the quality of what we’re doing along with its production and experience. Bringing that to the public, visitors, and all of our employees here is the most important thing.”

But the distillery’s ties to the Old World run a bit deeper than just admiration. Their flagship and all of their current whiskies are a blend of malt whisky imported from the U.K. with distillate made on-site. But this year and next, their focus is on rolling out the Courage & Conviction line, which features products made totally onsite.

His team is also continually experimenting with every step of the distillation process. Barley that lined the long driveway up to the 100-acre distillery last spring, for example, was actually part of an annual, long-term experiment aimed at creating a grain-to-glass product. Although their crop failed due to a fungus in the soil, they have been working closely with the agriculture extension offices in the area for insight on what to expect.

But the problem isn’t permanent, and the distillery plans to continue planting every year until they have a successful harvest. “Until we do that, we’ll probably limit the total acreage that we plant to 4 1/2 to 5 acres,” says Thomas. Once a harvest is successful, the grain will be dried naturally and sent to a malt house in Charlottesville that uses a hot air kiln rather than wood chips or smoke.

“We’re not necessarily going to impart any flavors or change the profile of that malt,” he continues. “It’s a little more of a terroir-style project in that sense. We’ll hopefully be able to scale up to a point where we can offer an estate grown, grain-to-glass single malt whisky.” 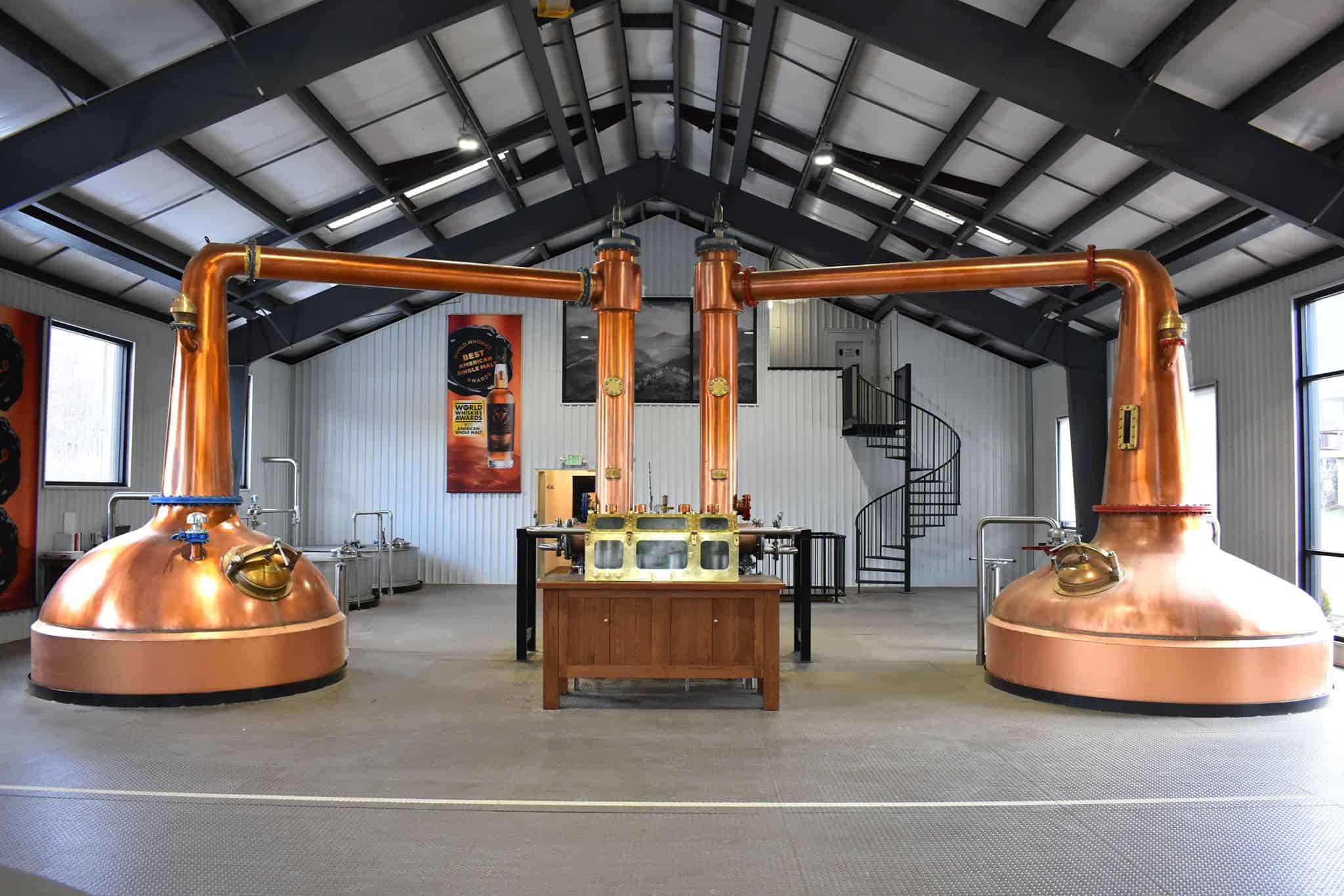 Since their founding, the signature whisky has been a blended malt that’s finished in port-style casks. Each release of the flagship has featured a different flavor profile, says Beckwith. “In spring, we’re aiming for smooth, sweet, light flavors, while in winter, it’s all about the baking spice. We take the blending process very seriously because it showcases flavors that let the whisky speak for itself.”

They’ve released whiskies finished in local beer, wine, and cider casks. Their rickhouses are also stacked with whiskies maturing in several types of sherry casks, as well as standard used bourbon barrels. Look closely there, and you might catch a glimpse of the sensors hidden in the warehouse to control airflow, humidity levels, and temperature. Once the spirit is close to coming out of the barrel, it’s rigorously analyzed to see how it might fit into a blend.

“I pull all of the data on color, aroma, palate intensity, body, aromatics, and finish into spreadsheets and look at trends,” says Thomas. “I use it to do a broader analysis to see what values are added from these casks.”

This data is also part of the distillery’s robust in-house sensory analysis program. Everyone on staff receives training on how to taste whisky, desirable flavors for the casks, and flaws in the whisky. Much of this training just comes down to practice, says Thomas.

Each week, distillery employees participate in events like whisky Wednesday trivia where employees get to show off their knowledge of world whiskies, as well as a lot of competitive tastings with brands from all over the world, says Brand Director Marlene Steiner. “It gives our team a wider understanding of the whisky profiles that are out there and how to hone into what we want for our own product.” 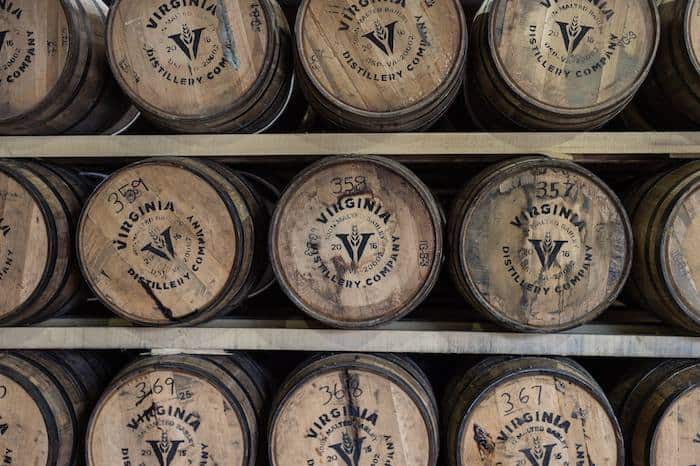 As a result of this program, a panel of 15 to 20 employees tests every cask to see where it might fit in their current slate of products – or where it might land in building a future product. “Ultimately, the data and feedback they provide gives us a path to making a selection,” says Thomas. “We look at scores and sensory analysis from the panel as a whole and go through four, five, sometimes six rounds to hone in on what specific casks or batches are adding value and how.”

When it comes down to it, it’s all about the whisky. For Thomas, this means understanding the process beginning to end, including growing the grain and malting the barley. “Craft production is understanding the whole process from start to finish,” he says. “It’s also understanding how consumers and the general public define it.”

In growing barley and showing every part of the whisky-making process on-site, Virginia Distillery Company hopes to inspire visitors’ understanding and passion for American malt whisky that mirrors their team’s. But even if they don’t, an afternoon spent touring the picturesque distillery and grounds or enjoying a dram at the tasting room is still an experience to take home.

307
Shares
1.5k
Views
Share on FacebookShare on TwitterGet Our Newsletter
Get The Glenlivet 18 Year Old at ReserveBar. Shop now!