The journey towards the release of Courage & Conviction, the new flagship American single malt whiskey from Virginia Distillery Company (VDC), has been a long traveled road for this Virginia distillery. Founded in 2011 by one George Moore, the doors to the physical distilling location opened a few years later in 2015 (Mr. Moore sadly passed away before seeing this happen). Freshly distilled malt whiskey began being put away in barrels for a future release even as whisky sourced from Scotland (blended with local product) and finished in port barrels was the heavy seller that put needed revenue into the coffers.

Fast forward to more recent times, and VDC last year released a preview version of what would be their Courage & Conviction bottling. Even as this began floating around in retail, the distillery at the same time survived a legal challenge from the powerful Scotch Whisky Association over its use of the word Highland. This has all now led up to the main event in the form of the new release.

The new Virginia Distillery Company Courage & Conviction American single malt whiskey, according to those behind it, is distilled on-site at the distillery’s 100-acre property in the foothills of the Blue Ridge Mountains in Nelson County, Virginia, using 100% North American malted barley and mountain spring-fed water. It is matured in old world sherry casks (three different types of sherry casks – Fino, Oloroso, Pedro Ximenez – makes up 25% of the target profile), traditional bourbon barrels (50% of the target profile) and re-coopered cuvée wine casks (premium European red wine producers, 25% of the target profile) for a minimum of three years. 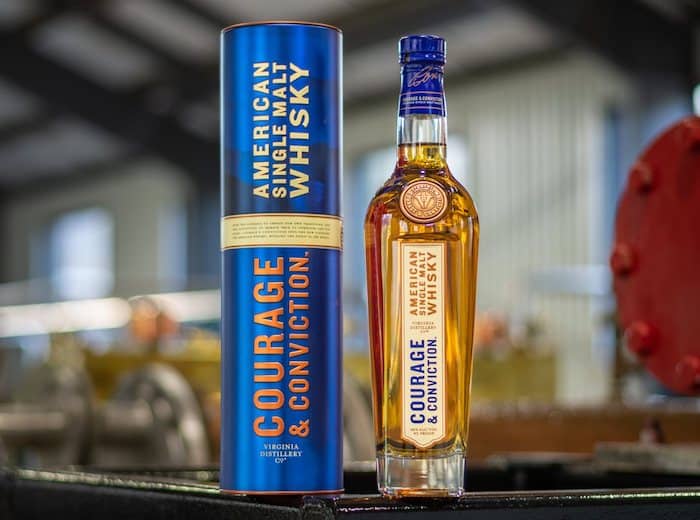 “Our new line sets a new standard for American whisky and we believe it rivals the finest whiskies in the world. But most importantly, I know it’s a whisky my dad would be proud of.”

Plans call for the initial release of Courage & Conviction, bottled at 92 proof (46% ABV), to begin this month. 9,600 bottles, each pricing around $75, have been produced, and additional releases that will feature individual bottles of each cask type are slated to debut later this year

You’ll find some official tasting notes for this new American single malt below for your consideration from VDC. It should be noted as well that the whiskey’s name is an ode to George Moore, who often repeated the phrase “always have the courage of your convictions” to reinforce “the importance of believing in yourself and your ideas.”

The first batch of Courage & Conviction features notes of caramel and butterscotch and evolves on the palate with hints of raspberry, cocoa, barrel spice and vanilla. Additional nuances of the Dr. George G. Moore batch include aromas of salted caramel and milk chocolate, with orange zest and notes of toffee and cinnamon. The finish is creamy and exceptionally smooth.