Vikre Out Of Minnesota Blends A Scotch, Rye & Bourbon For New Release

The idea of blending in whiskey, whereby you pull from different barrels whiskeys you feel will fit best together as their own blended bottling, is nothing new in the realm of Scotch. Not quite as much in the United States whiskey world though, which is why a new release from Vikre Distillery out of Minnesota looks interesting for the fact it blends three different major whiskey styles into one expression. 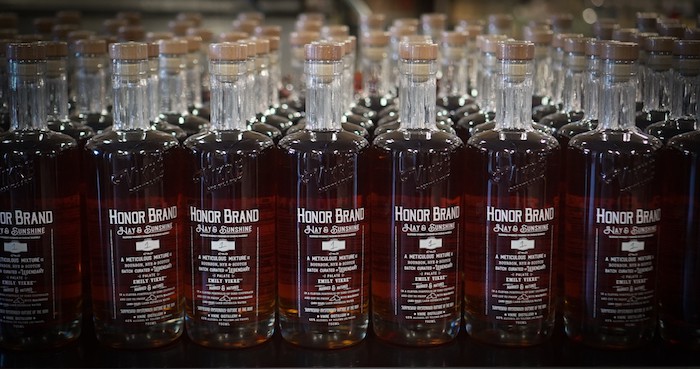 Vikre Honor Brand Hay & Sunshine, according to those behind it, brings together a mixture of bourbon, Scotch and rye whiskeys from undisclosed sources. As to what brings what to the party and why, here’s what Virke had to say about it in their notes on this whiskey:

Bourbon gives it a sunny disposition, with its cheerful caramel, butterscotch and vanilla sweetness. The Scotch cuts the sweetness a bit, contributing a cereal grain character. Finally the rye, a more grassy than spicy example, evokes a freshly mown hayfield.

Pretty self explanatory, no? The resulting whiskey, bottled at 46% ABV, is just now hitting store shelves in Minnesota. As for the idea of blending, Vikre’s Emily Vikre believes that “blending is not inherently bad, in fact it has the potential to be very, very good.  But any blend is really only going to be as good as the quality of the things you put into it.”

What’s also a bit fascinating about this release is the name Honor Brand. As the story goes research was being done into the history of the old building in which the distillery was built. It was learned it once housed the Gowan Lenning Brown Company, a large grocery wholesaler from the early 20th century. Just like the grocery companies of today, they had a house brand. And that house brand was called “Honor Brand,” which has as its motto “Honor Brand is better.” From there Vikre decided to adopt the name for a line of its bottlings.

Besides Honor Brand, Virke has a number of other interesting whiskeys in the market we’ve already reviewed, including Sugarbush (maple barrel finished), Iron Range Single Malt (made in collaboration with a local brewery) and Northern Courage Smokey Rye (mash bill includes oats, smoked barley and rye).

1
Shares
539
Views
Share on FacebookShare on TwitterGet Our Newsletter
Get The Macallan® Rare Cask at ReserveBar. Shop now!