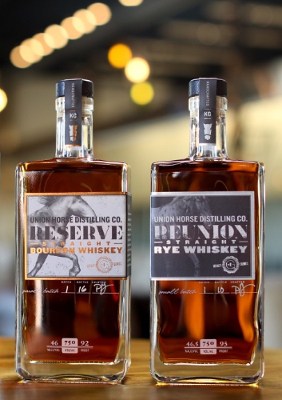 Union Horse Distilling, formerly known as Dark Horse Distillery (more on that in a bit), is one of the rising tide of so-called grain to glass whiskey makers – distillers that do everything onsite, from grain milling through bottling. Union Horse now has a re-branded bourbon and rye available to the public, known as Reserve Straight Bourbon and Reunion Straight Rye.

What was then known as Dark Horse Distillery was founded back in 2010 as a family-run operation. The name Dark Horse, however, fell into contention, and eventually the distillery found itself in a lawsuit with winery giant E. & J. Gallo. It lost that suit and, as a result, was ordered by a judge to change its name. The new Union Horse, name, according to the Kansas City Star, was chosen in part to symbolize “unified spirit” among those who run it.

As for the whiskies, the Union Horse Reserve Straight Bourbon is distilled from a sour mash recipe of corn and rye in the Union Horse copper pot still before being aged upwards of five years in new American oak barrels. It is bottled at 92 proof. Limited tasting notes suggest “tender notes of creamy vanilla, maple and smoke.”

The Union Horse Reunion Straight Rye, meanwhile, is a 100 percent rye mash bill also aged for up to five years. It is bottled at a slightly higher 93 proof, and limited tasting notes suggest “smooth complex notes of butterscotch, caramel, ginger and cinnamon spice.”

“After pulling selected barrel samples and blending each one, we settled on 92 proof for bourbon and 93 for rye,” said Patrick Garcia, master distiller, Union Horse Distilling Company, in a statement. “We feel the respective proofs are where the flavor notes of our latest spirits shine. With Reunion Straight Rye, we’ve crafted a spirit that captures what it means to be together, while Reserve Straight Bourbon is a subtle reminder that some things are best enjoyed slowly.”