The Plight Of One Small Distiller Reflects Some Nationwide Struggles

Editor’s Note: We’ve republished here a note posted by Cannon Beach Distillery, a well regarded and small craft distiller, to their Facebook page about the pending closure or sale of their distillery in Oregon. The reasons for closure reflect the struggle some in this business face in certain states with regards to taxes and the like.

It is with a heavy heart that I have decided to seek a sale or shut down Cannon Beach Distillery within the next year.

I opened Cannon Beach Distillery as a one-man operation 7 years ago on July 1st 2012. I have taken enormous pride in distilling every drop of our alcohol from a raw ingredient in an effort to make the best spirit possible. I have never sacrificed the integrity of my product, and I never will.

Unfortunately, the tax structure on distilled spirits implemented by the Oregon Legislature through the O.L.C.C. has become a burden that I am no longer willing to bear. Oregon takes 33% of the retail cost of a spirit even though we sell it ourselves. Rather than taxing the alcohol content, the State owns a percentage of the value we add to our product, and it has financially hogtied my business. On average, more than $10 of one our bottle sale must be paid to the OLCC on a weekly basis. This has amounted in payments of nearly $600,000.00 in the last seven years. We are one of the smallest alcohol manufacturers in the State, yet we produce as much state revenue as some of the largest breweries and wineries in Oregon.

In short, I cannot afford to maintain this style of distillery in Oregon, and I refuse to be cowed and controlled in how I can run my business.

Last October I became engaged to an incredible woman who seized an opportunity to help children as an orthopedic surgeon at Children’s Hospital in Colorado. Courtney and I have been going back and forth from Colorado to Oregon for several years. It has always been my intention to maintain Cannon Beach Distillery, and I have been working tirelessly to do so with the support of my fiancé. I can no longer reconcile the amount of work I need to do in Oregon with the opportunity that the distilling laws of Colorado provide. 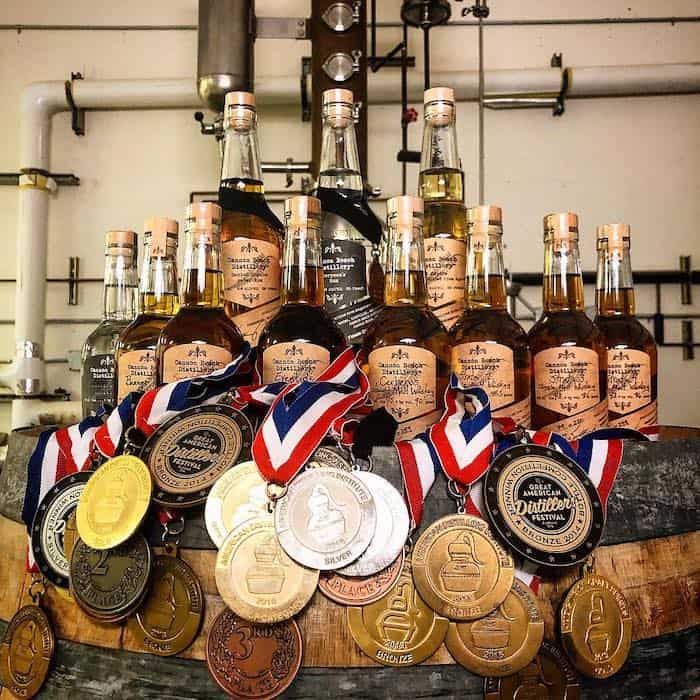 Another Oregon legislative session has come and gone. It continues to be my hope that elected officials will act on this issue rather than recognizing it and doing nothing. However, I have lost faith that anything meaningful will happen in the near future. I have given testimony to what seem like deaf ears. Combine that experience with the fact that I would be paying less than 1/15th the tax in Colorado, and I am forced to realize that my best opportunity is no longer in Cannon Beach.

I’m not sure what the future will bring. I love distilling spirits, and I feel like I have only scratched the surface of what is possible. It brings me great sadness that my ultimate dreams will not be realized in Cannon Beach, but I am so much better prepared for the next step because of my experience here. Cannon Beach will always be home in my heart. This process would have happened far sooner if I didn’t have so much love for this town, and a deep connection to the area.

I really hope that Cannon Beach Distillery can live on under different ownership. I have a roadmap for success for this place, but never had the financial ability to see it through. I never wanted to focus on just one or two products, but someone who does could be very successful here. Stay tuned.

In the mean time, we have 4 Whiskeys we plan on releasing before the end of the year, among other projects. We are maintaining production for our summer tasting room sales, but will cease all OLCC distribution. I am working on one final batch of Lost Buoy and Peters’ Family Gins this July, which we have not released in several years. I would rather celebrate the success we’ve had rather than wallow in ‘what could have been’.

I know this news will be disappointing to many of my customers. I cannot express enough appreciation for all your support, and completely understand if this makes you frustrated. I am too. At the end of the day, I am the one ultimately responsible for the success or failure of the business. Period. It hurts to know that I am letting people down. You all have fueled my efforts here. All the compliments and encouragement I have received are emotional to think about. Please know that I appreciate every word of it and all the opportunity you have given me here with your support.

Cheers to you.
Sincerely,