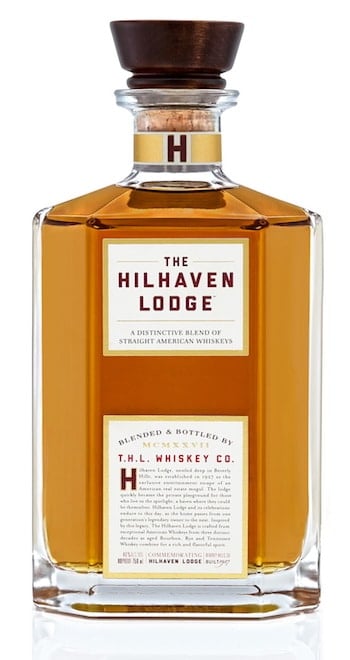 The rise of musician Drake and his celebrity whiskey, besides getting my blood pressure up, overshadowed another recent whiskey release with celebrity overtures. Known as The Hilhaven Lodge, it is tied to a legendary Beverley Hills home owned by producer and director Brett Ratner, and has turned up in California, courtesy of spirits giant Diageo.

Hilhaven Lodge, first established in 1927, was developed to be “the exclusive entertainment escape of an American real estate mogul.” It become, as the decades went along, a so-called “posh playground of Hollywood’s elite” as it changed hands in ownership several times before falling into Ratner’s custody. The director, for whatever reason, decided he wanted to get in on the whiskey game, and teamed up with Diageo to begin building the brand.

Not so fast, however, said Diageo rival Heaven Hill Distilleries, which sued Ratner last year, according to the Hollywood Reporter, because of possible confusion over name similarities. It was believed the Hilhaven Lodge whiskey would “inevitably create a likelihood of confusion in the marketplace, thereby infringing Heaven Hill’s rights in its Heaven Hill mark.”

The two parties eventually settled, and the whiskey continued development under the Hilhaven Lodge brand. A swanky launch party Diageo and Ratner had last month marked the official debut of this bottling, described as “a distinctive blend of three different styles of whiskey spanning across three decades – Bourbon from the 2000’s, Tennessee Whiskey from the 1990’s and Rye Whiskey from the 1980’s.”

Though the official distillery source, or sources, of the whiskey was not revealed by Diageo, the final product, clocking in at a mild 80 proof, was “hand-bottled at Stitzel-Weller in Louisville, Kentucky.” The bottle the whiskey has been put into is somewhat distinctive in nature, presenting as a packaging “inspired by the Lodge itself…the blank space created by the bottle’s label creates an “H,” a nod to Hilhaven Lodge, and the bottle is capped with a wood cork.”

The Hilhaven Lodge Whiskey, pricing around $50, will initially be available in limited quantities in California and Florida. Official tasting notes are below.

The Hilhaven Lodge is rich in candied fruit notes, contributed by the bourbon, and dark brown caramel notes, from the Tennessee Whisky. The mid-palate is full of light spice notes of clove, coming from the aged rye. The finish is long and smooth, with silky notes of lush vanilla, a subtle sweetness and a vibrant oak nuance.

58
Shares
229
Views
Share on FacebookShare on TwitterGet Our Newsletter
Get Jefferson's Ocean at ReserveBar. Shop now!