The Heat of The Moment: Charred Barrel vs. Toasted Barrel

The aging process is one of the most important parts of making whiskey. Turning a high-proof moonshine into a smooth bourbon or sophisticated scotch requires time, patience, and, above all, barrels. However, not all whiskey barrels are created equal. In addition to the wood used (almost always white oak), the barrel itself must be prepared beforehand. How, you ask? By burning the insides, of course. While this process may relatively straightforward, there are distinct two types of burning procedures that whiskey makers use when crafting their barrels: toasting, and charring. What is the difference between the two? Is one better than the other? Let’s find out.

When comparing the two methods, the fundamental variable is the degree to which the wood is burned. Charred barrels, for example, are burned to a crisp, and resemble the remains of a campfire after it has been extinguished. The interior of charred barrels are black and have much more ash residue, resulting in a much darker color for the whiskey. As far as flavor goes, charred wood imparts sweeter flavors like caramel and honey. The reason for this is that the wood sugars are caramelized when heavily burned, and thus they leach into the whiskey.

Now, you will find you hear sometimes a barrel has been charred to a certain number (i.e. new American white oak barrel with a #4 char). This “barrel char level,” as it is called, basically means the higher the number, the deeper the burn char into the wood. There’s a lot of science around this, but know in essence the darker the char, the more different the flavor profile will be and the more colorful the whiskey likely will be.

Charred barrels also have another effect on the alcohol: the carbon in the ash acts as a filter for the harsher elements of the liquor. Aging whiskey (like bourbon) in charred barrels results in a smoother, mellower flavor. 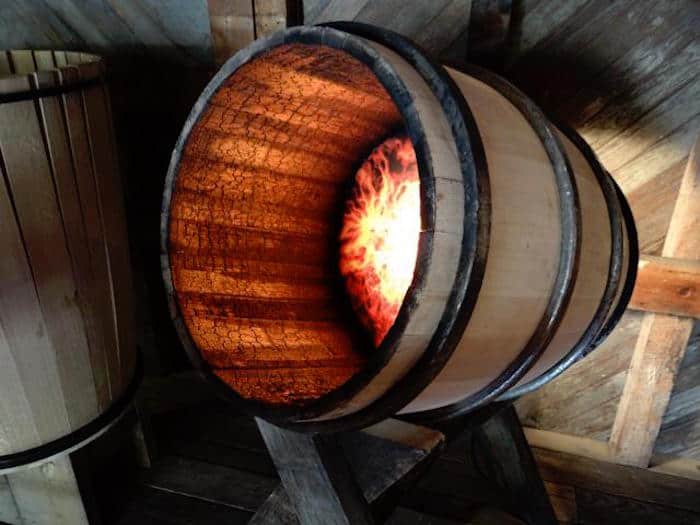 Unlike their charred brethren, toasted barrels are heated much more gently, resulting in a dark brown toast rather than a blackened char. Toasted barrels add a bit more vanilla flavor to the liquor, as well as spicy accents. Because the wood hasn’t been burned to a crisp, the sugars haven’t had time to caramelize, making the whiskey a bit sharper on the tongue. Toasted barrels also do not impart as much color into the spirit, resulting in a lighter shade.

So which method is better? Ultimately, it comes down to personal preference. If you like a smooth, rich, sweet-tasting whiskey, then seek out whiskies aged in charred barrels. If, however, you enjoy a strong, spicy drink, then a toasted barrel whiskey would be more to your liking. As far as we’re concerned, however, any reason to drink whiskey is a good one, regardless of the barrel in which it was aged.