In the realm of Texas whiskey, many know the names of the bigger players like Balcones and Garrison Brothers. There exists many other quality whiskey makers there, however, and one of these is Andalusia Whiskey Co. They’ve grabbed a few headlines of late for recently being the first in state to release what’s described as a “bottled in bond Texas whiskey produced grain to glass.”

The new Andalusia Whiskey Co. Bottled in Bond Single Malt, according to those behind it, fits the qualifications for being labeled bottled-in-bond. This includes meeting all of the qualifications for its category plus being distilled by one distillery, in one season, by one master distiller; aged in new charred oak barrels for at least four years in a bonded warehouse; and bottled at 100 proof. 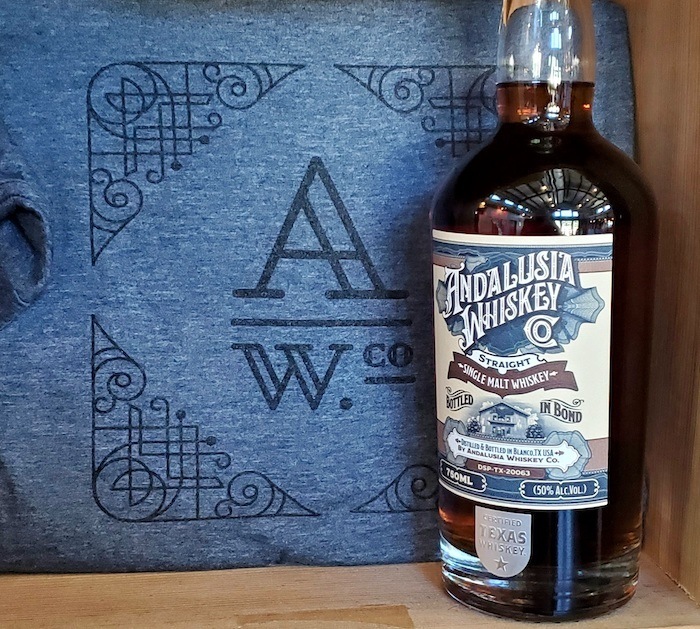 “Quality and authenticity have been our focus from day one,” said Andalusia Whiskey Co. co-founder Ty Phelps in a prepared statement. “We always knew we wanted to create a bottle in bond whiskey because it represented quality.”

“The Texas Whiskey industry has seen amazing growth in both the number of distillers and quality of products. So it is important to us that we create something we are proud to share with people,” added co-founder Tommy Erwin.

Specifics of this expression indicate it to be 100% malted barley, double distilled in a copper pot still, and aged four years in new 53-gallon #4 char oak barrels. Limited official tasting notes make mention of it being “described as a bourbon lover single malt, no smoke with flavors of chocolate, dark cherries, vanilla, oak, leather, malt.”

Andalusia Whiskey Co. Bottled in Bond Single Malt is available directly through the distillery at this time, pricing around $70 per 750 ml bottle.