They call it a Tennessee High Malt with dual citizenship. Inspired by Scotland’s light and easy-drinking Lowland whiskies, Chattanooga Whiskey’s new, hybridized “High Malt” Batch 019 is said to gather complexity from its European provenance. In this new offering from the distillery’s experimental series, the European oak high malt is made from only two grains, corn and malt.

The distillery notes that the minimalist mash bill highlights a single-source Scottish spring barley malt, mostly used in Lowland grain whiskey & Scotch. The Batch 019 is aged for four years in charred European oak barrels, as the long-seasoned, highly aromatic wood character is designed to complement the sweet, grassy and floral character of the spring barley malt.

The mash bill of yellow corn and Scottish barley malt imparts notes of raw honey, chamomile, cut hay, peach tea, and granola. Batch 019 clocks in at 102 proof and it is available exclusively at the Chattanooga Whiskey Experimental Distillery in downtown Chattanooga, Tennessee. 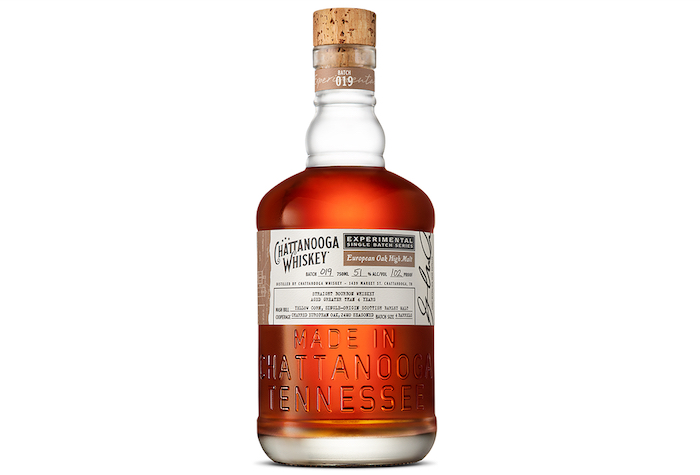 In the case of Batch 019, there’s much emphasis on the oak … European versus American.

“Tight grain” European oak is known for having smaller growth rings. These “annual rings” contain a higher proportion of aromatic vessels (gaps), which are higher in tannins (mouthfeel), and lend a more delicate, spiciness to the whiskey.

“Open grain” American oak, however, is known for a higher proportion of fibrous “summer wood,” and higher levels of oak lactones – which impart increased woody notes of vanilla and coconut to the spirit.

Shares
270
Views
Share on FacebookShare on TwitterGet Our Newsletter
Cheers to the Dads! Personalize a bottle of his favorite whiskey to create a modern gift for the modern man. Use code: FATHERSDAY20 for $20 off your next order of $100 or more at ReserveBar